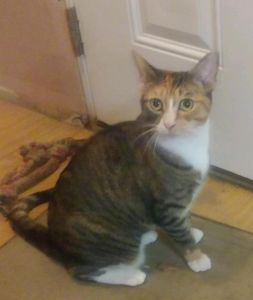 Hello Everybody!
Piper D. Katt here!
Now I've been asked a lot...
Okay, mostly by my mom and dad.
But the inquiry is raised on a regular basis, "How come there aren't more pictures of you Piper?"
Do I really need to remind everybody that being a cat, I'm naturally aloof and shy?😼
Well you folks are in luck because accompanying today's Sunday Funnies is not one but TWO brand new photos of me!
The Free Choice E-zine's staff photographer finally managed to catch a few candid pictures of me and when I catch him...
Anyway, let me start telling some camera📷 jokes and we'll see what develops.
My mother is fed up with her camera lens flying away and perching on things.
It was quite aperture.
What did the film camera say to his digital son?
You can never be negative.
Why did one company selling cameras buy another company doing the same thing?
They wanted to take the competition out of the picture.
Now then, first new picture of Yours Truly!
The image on the right is NOT one of my better poses.
I had been interrupted and shooed out of the bathroom so one of my humans could use their litter box before I had finished using mine.
Then they complained about the mess in mine!
Well, it's not like mine has flush capabilities.
Besides, they didn't give me a chance to finish, so if it was left unburied...
BACK TO THE JOKES...
When someone tells a photographer that their camera takes nice pictures, does the photographer smile at them and say, "Thanks. I taught it everything it knows."
Photographers shutter at the thought of their cameras not being able to take pictures.
Why are photographers good problem solvers?
Because they look at problems from a different perspective.
Speaking of which, here's the other new photo of meow. 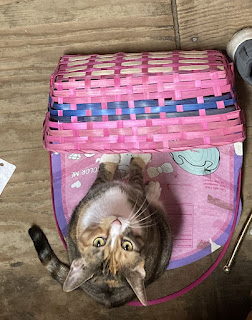 The photo on the left was taken in the mud room of the house where I live.
First off, I have absolutely no idea why they call it a mud room because I've never found any mud in it.
Seriously though, while I am looking up at the camera, the smile on my face is more from the Kitty Treat the photographer was dangling at me in his free hand before I became aware of the camera focused on me.
BUT BACK TO THE JOKES...
Do turtles🐢 take shellfies?
It isn't easy to find photography puns because they haven't all been developed yet.
If you tell the same photography joke too often, does it become over exposed?
And on that note♫...
Next weekend I'll be teaming up with Koda Canine for our annual FATHER'S DAY POST.
Until then take care.
STAY SAFE! 😷
Have a great week and please be back next time for more Sunday Funnies!—PDK.
Posted by Lee Houston, Junior at 5:55 PM