From out of the shadowy mists of the past to entertain the New Pulp readers of today, it's Pulp Obscura. 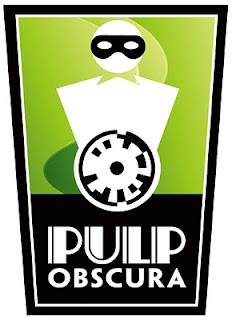 Altus Press, the foremost publisher of quality pulp reprints and new material has formed a creative partnership with Pro Se Press to present Pulp Obscura.
The goal is that when Altus publishes selected titles featuring rare and largely forgotten Pulp Character's original stories from the 1920s and 1930s, Pro Se will bring together the best writers of New Pulp today and simultaneously release a collection of newly written tales staring the same character.
This stunning partnership will showcase both the classic adventures of some of Pulp's long lost treasures while allowing them to come back to life in new adventures.
"This is no easy task," revealed Tommy Hancock, Partner and Editor-In-Chief of Pro Se Press. "To provide brand new, exciting adventures of rare, classic Pulp Characters and to coordinate that with Altus Press is one thing. But finding the right authors who can breath new life into these concepts while planning and scheduling

which books will come out when...
"It's a heck of a task and one that has been rewarding on SO MANY levels," continued Hancock. "We are extremely proud to be able to announce a fantastic line up of writers for PULP OBSCURA. Some of the creators involved are well known figures in the Pulp Community. Others are prestigious in other genres and literary fields, and there's even a blossoming new author or two thrown into the mix. It says a lot about a pending project when a publisher puts out a call for participants and is flooded with responses."

"It's going to be great to see this new material. Interest in the series has been huge and the enthusiasm by the writers will certainly result in plenty of enjoyable reading," added Matt Moring, publisher of Altus Press. "I cannot recall such a publishing plan ever undertaken in the history of the pulp community."
The initial release schedule for 2012 is:
*THE NEW ADVENTURES OF RICHARD KNIGHT, VOLUME ONE
Featuring the daring pilot/detective who encounters lost worlds and oddities galore; with stories by Josh Reynolds, Barry Reese, Adam Lance Garcia, Ian Watson, Frank Schildiner, and Terry Alexander .
*THE NEW ADVENTURES OF THE EAGLE, VOLUME ONE
Classis two fisted spy stories of espionage and intrigue written by Bobby Nash, Teel James Glenn, Rich Steeves, Ashley Mangin, Nick Ahlhelm, and Lee Houston, Junior.
*THE PRICE OF THE MISSIONARY'S GOLD: NEW ADVENTURES OF ARMLESS O'NEIL, VOLUME ONE
Classic Pulp Adventure in Exotic Lands with a tough as nails hook-handed hero seeking treasure and action; with stories by Sean Taylor, Rich Steeves, Ian Watson, Chuck Miller, Andrew Hind, and Nick Ahlhelm.
*THE NEW ADVENTURES OF THE GRIFFON, VOLUME ONE
Thrill to the adventures of Kerry Keen, the masked hero known as The Griffon! High Flying Escapades in the pursuit of justice written by Don Thomas, Rich Seeves, Chuck Miller, Van Allen Plexico, Phil Bledsoe, and Stefan Dogaru.
*THE NEW ADVENTURES OF THUNDER JIM WADE, VOLUME ONE
Globe spanning adventures into the darkest, strangest corners of the world with a hero like no other! Your tour guides will be Barry Reese, Andrew Salmon, Ashley Mangin, Nick Anlhelm, Andrew Hind, and Frank Schildiner.
*THE NEW CASES OF MAJOR LACY, VOLUME ONE
Follow the Major and his intrepid team as they take on crimes and criminals no one else can stop with the help of C. William Russette, Andrew Salmon, Bobby Nash, Andrew Hind, Don Thomas, and Rich Steeves.

Future volumes are in the works, featuring the talents of those already participating along with:
Howard Hopkins, Derrick Ferguson, Andrea Judy, Nancy A. Hansen, Allan Gilbreath, Jon Edward Klement, Mike Bullock, Russ Anderson, BC Bell, and many more.

More information and future books will be revealed as the individual projects draw closer to their respective press times from Altus Press at www.altuspress.com and Pro Se Press at www.prosepulp.com