MAY IS BREAST CANCER AWARENESS MONTH.
MAY 5 IS CINCO DE MAYO.
MAY 5 IS FREE COMIC BOOK DAY at participating locations.
MAY 7-11 IS TEACHERS APPRECIATION WEEK!
MAY 8 IS THE 75TH ANNIVERSARY OF TEX AVERY’S “RED”
DEBUTING IN RED HOT RIDING HOOD.

*If you Tweet, you might want to change your Twitter password!
*American Vice President Mike Pence has postponed his impending trip to Brazil to focus more resources on the US/North Korea summit.
*Negotiations for Britain’s departure from the European Union continue.
*Are human beings Earth’s second sentient species??? 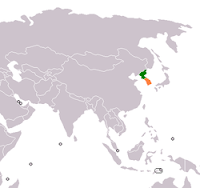 FROM NORTH AND SOUTH KOREA…
*North Korea is willing to close a nuclear “testing” sight and give up its nuclear arms program if the US doesn’t attack them. (There are 2/TWO separate links in this item.)
*Maybe the summit between North Korea and the US will take place here???
*North and South Korea are now on/in the same time zone.
*The summit between South Korea and America has been officially scheduled for May 22.

THE TERRORIST REPORT…
*An Iraqi court has sentenced women found guilty of voluntarily(?) joining ISIL forces.
*The Free Choice E-zine does not support terrorism, no matter what the “cause” or alleged “justification”. Thus we will only be posting news items in this section whenever terrorists are brought to justice.

*Stormy Daniels has officially sued Donald Trump for defamation of character. But what is he saying about the situation now??? (There are 2/TWO separate links in this item.)
*Aren’t Trump and Rudy Giuliani supposed to be on the same side???
*Secretary of State Mike Pompeo says the US will leave the Joint Comprehensive Plan of Action if its “flaws” aren’t fixed.
*Will Robert Mueller subpoena President Trump???
*President Trump’s latest executive order now allows federally funded faith based programs/groups more freedom.
*Donald Trump shared his opinions on the White House Correspondents Dinner he didn’t attend and America’s new embassy building in London. (There are 2/TWO separate links in this item.)
*President Trump has threatened another government shutdown if construction on his border wall doesn’t begin “soon”, but has promised farmers they can still use their “guest workers”??? (There are 2/TWO separate links in this item.)
*But even if he wants to, can Trump REALLY close America's borders???
MEANWHILE…

*Depending upon the results of the 2018 mid-term elections, will impeachment be on the agenda in 2019???
ELSEWHERE…
*Who has been sending “packages” to elementary school girls???
*Kids caught a teacher being bad.
*Volcanic activity has increased in Hawaii, leading to eruption(s). (There are 2/TWO separate links in this item.)
*Since when is THIS in the cheerleader job description???
*Was it a legitimate ejection, or something else???
*Will T Mobile and Sprint merge???
*Gibson Guitars has filed for bankruptcy protection.
*Pauley Perrette’s last NCIS episode as Abby Sciuto is scheduled to air May 8.
*Albert Pujols has made his 3000th career hit in professional baseball.
* “Justify” won the 2018 Kentucky Derby, the first leg of the annual Triple Crown event of professional horse racing.

THE FREE CHOICE E-ZINE WOULD LIKE TO THANK ITS LOYAL READERSHIP FOR GRANTING US 1,614 PAGE VIEWS IN APRIL 2018.

For more news at any time, either scroll down to our IN OTHER NEWS feature at the bottom of your screen or visit any other reputable news source.
Posted by Lee Houston, Junior at 11:37 PM

Email ThisBlogThis!Share to TwitterShare to FacebookShare to Pinterest
Labels: 2018, April 29-May 5, news, The Week In Review