Hello Everybody! Piper D. Katt here!
It's such a nice, quiet Sunday that I almost slept through posting my contribution to this column today.🙀
Or I would have if not for all the sports fans down the hall watching TV and arguing commenting about how their respective teams are doing.
Until the end of September there is both regular season baseball⚾ and football🏈 on right now. Plus the finals of Women's Basketball🏀, the stray golf🏌 tournament and who knows what else?
I know there is at least one full time pro-animal channel out there, but why they don't stick with covering felines 24/7 is beyond me.
Anyway...
Listening to some of those sports pundits, analysists, and whoever else gets to talk about what's going on during the game instead of actually showing the game in progress is quite interesting from my perspective.
Things like...
“We had 99 percent of the game sewn up. It was the other three percent that cost us.” 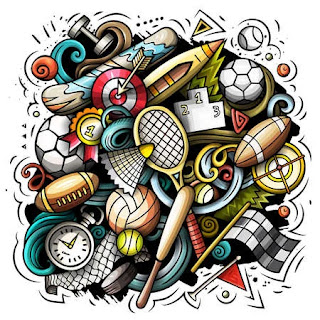 “We didn’t underestimate them. They were just a lot better than we thought.”
"Alaska and Hawaii don't win many games in the United States."
“Any time our team scores more and holds the other team to less than what we score, we almost always win.”
"My career was sputtering until I did a 360 and got headed in the right direction."
"The only thing that keeps this organization from being recognized as one of the finest in baseball⚾ is wins and losses at the major league level."
"We can't win at home. We can't win on the road. As the general manager, I just can't figure out where else to play."
"Winning this bicycle🚵 race wasn't just a question of endurance and having the right equipment, but pedaling faster than everyone else too."
OH-KAY! On that note♫, take care.
STAY SAFE! 😷
Have a great week and please be back here again next weekend for more Sunday Funnies!—PDK.
Posted by Lee Houston, Junior at 5:25 PM