Hello Everybody!
The Free Choice E-zine's Editor-In-Chief Lee Houston, Junior here because both Piper D. Katt and Koda Canine have the weekend off since it's Labor Day between the United States and Canada.
You know, one thing I've really loved over the years is movies.🎥
I've seen a lot of them from Casablanca to the CGI version of Godzilla versus King Kong and thousands more, whether they were originally made for the "Silver Screen" or television.
However, lately it's just been TV either through cable or the DVR since COVID first appeared. 😷
But whether it's a science fiction extravaganza or a more down to earth romantic comedy, any movie has a lot in common with its brethren. Like, for example...
All telephone📱 numbers, at least in America, begin with the digits 555.
Any person waking from a nightmare will sit bolt upright and pant.
It is always possible to park directly outside the building you are visiting.
If you decide to start singing and/or dancing in the street, everyone you bump into will know all the words and/or steps.
No matter how badly a spaceship is attacked, its internal gravity system is never damaged.
The more a man and a woman hate each other, the more likely they will fall in love.
The Eiffel Tower can be seen from any window in Paris.
Computers never display a cursor on screen but always say: Enter Password Now. 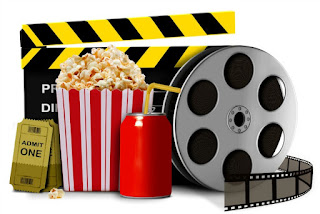 Once applied, a woman's makeup will never rub off, even in or under water.
All watches and clocks are synchronized to the second.
No matter how fuzzy the photograph, it can be enlarged and enhanced to show the finest detail.

Most laptop computers are powerful enough to override the communication systems of any invading alien civilization.

When paying for a taxi, don’t look at your wallet as you take out a bill — just grab one at random and hand it over. It will always be the exact fare.

When you turn out the light to go to bed, everything in your room will still be clearly visible, just slightly bluish.

If your town is threatened by an imminent natural disaster or killer beast, the mayor’s first concern will be the tourist trade.

It does not matter if you are heavily outnumbered in a fight involving martial arts — your enemies will wait patiently to attack you one by one by dancing around in a threatening manner until you have knocked out their predecessors.

A man will show no pain while taking the most ferocious beating, but will wince when a woman tries to clean his wounds.😕

So grab some popcorn. Kick back and relax with a good movie.
Take care.
STAY SAFE!😷
And please be back here next weekend when Piper D. Katt and Koda Canine team up for our annual Back to School salute on The Sunday Funnies!—lh,jr.
Posted by Lee Houston, Junior at 10:57 PM