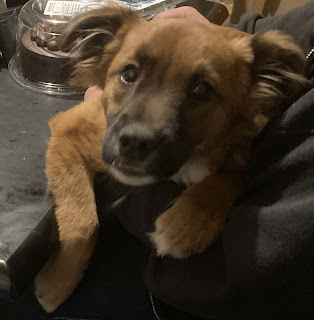 Hello Everybody! Koda Canine here!
Now I know all there is to know about being a dog, but sometimes I get to wondering about all the other animals out there in the world.
Don't you?
Let's take a closer look at some interesting TRUE tidbits concerning other members of the animal kingdom and my comments.
Ready?
Giraffes🦒 spend up to 75 percent of their day eating!
I'll admit I'd like more in my food dish than what my people actually give me, but even I'm not THAT hungry!
Otters🦦 hold hands when they float.
AAAAAAHHHHH! Isn't that sweet?
No word on the romantic relationship(s) of the individual otters involved, so I guess it's more a question of the "Buddy System" than anything else.
Dolphins 🐬 give each other specific names.
I wonder where they put the name tags when they have large gatherings?
Sperm whales 🐋 have BFFs, and Cows 🐮 have friends.
I can believe that. After all, it probably gets pretty lonely out in that big ocean or wide field otherwise.
But if you don't believe me, check out their Facebook pages.
Rats 🐀 laugh when tickled.
Okay. You have to wonder who was the first person to tickle a rat and found this out, let alone why?
Seven percent of Adults believe chocolate milk comes from brown cows.
You mean it doesn't?
Turtles 🐢 breathe through their....
Well, let's just say it's on the opposite end from their nose..
Bees understand "Zero" and can do simple math!
And here I thought rabbits 🐰 were smart because they could multiply. 😉
Herring fish communicate by passing gas!
I certainly wouldn't want to be near one when it's giving a long speech!
The hybrid offspring of a Polar Bear and a Grizzly Bear is called a Pizzly Bear.
Geez. I didn't even know they were dating, let alone married.
The name Humming Birds comes from the rapid beating of their wings.
So the old joke about they forgot the words to the song isn't true?
On that note♫, have a great week!
Take care.
STAY SAFE! 😷
And please be back next weekend for more Sunday Funnies!—KC.
Posted by Lee Houston, Junior at 11:53 PM