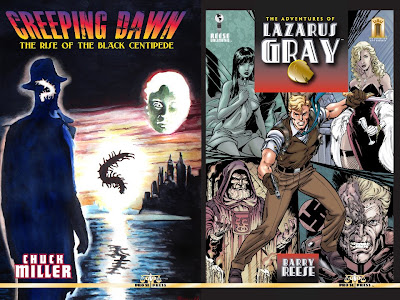 To kick off their second year of publishing, Pro Se Press released not one, but TWO new novels!
In alphabetical order by author, first up is Creeping Dawn: The Rise of the Black Centipede by Chuck Miller, featuring the debut of one of the creepiest characters in New Pulp fiction history in a world of magic, mystery, and mayhem.
The Adventures of Lazarus Gray by Barry Reese, creator/author of The Rook.
How can one man be expected to survive the mysteries and intrigue of Sovereign City when he doesn't even know his real name?
Both are fascinating reads and are available now from Pro Se Press via Amazon.com.
Posted by Lee Houston, Junior at 1:07 PM