Today is Veterans Day here within the United States of America, and the first year of a new decade whereupon by the beginning of next year, there might actually be some peace within the world.
Some like to portray Americans as war mongers.
That is not the case.
Those same people think our soldiers are nothing but cannon fodder, either to carry out this country's objectives or as an obstacle to achieving their own.
Neither position is the truth.
The public and world perceptions of the various branches of the United States' military over the last decade or so have not always been within the best possible light.
The soldiers, carrying out the orders of those above them, have taken flak from the media, those they have tried to help and at times, even from their fellow Americans.
Troops have gone onto foreign soil for different reasons over the course of history, but those actions come down to three main things.
To defend the innocent.
To assist our allies.
To defeat the bad guys.
But the definition of that last term has seriously changed over the course of history too.
Today, the enemy appears out of nowhere, striking without concern to either military NOR civilian causalities, using methods that disgust everyone else.
There are others who think the enemy are those in private business, making a profit off the suffering of others.
But regardless of the opponent, there is no question that war is hell, yet at times such actions must be taken in order for there to be peace.
Hopefully, that objective has been obtained in the desert, for those deployed will be out of that region by the end of this calendar year.
You can question the decisions of those who have commanded the troops since 2000.
Yet there is no denying the past achievements of America's military, nor the bravery and courage of those men and women who have proudly served this country.
Today is their day.
Remember them. 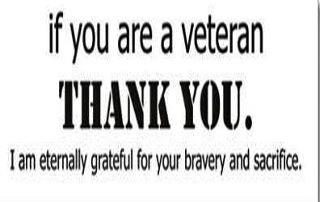 The above was an editorial.

Posted by Lee Houston, Junior at 9:10 AM