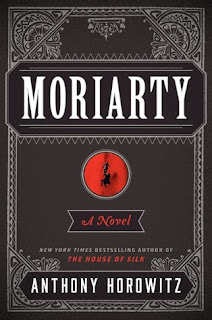 The world mourns the (apparent) death of the famous detective Sherlock Holmes, who plunged over the Reichenbach Falls fighting his arch nemesis Professor James Moriarty, in what creator Sir Arthur Conan Doyle hoped would be his last Holmes story: "The Final Problem".

Yet while Doctor John Watson slips quietly back into the private sector, Moriarty's absence creates a vacuum as others seek to declare themselves the new Napoleon of Crime, without the devious subtlety and non-violent approach that the Professor was known for.

One of these would be candidates hails from America, which leads Pinkerton agent Frederick Chase to join forces with Scotland Yard Inspector Atheleny Jones (introduced in Doyle's Holmes novel The Sign of Four) in hopes of bringing this rogue to justice, and perhaps creating a new team to take on the mysteries and criminals of Victorian London in the process.

While Doyle eventually bowed to fan pressure and brought Holmes back to literary life, Anthony Horowitz explores those dark days with both a modern writer's sensibilities and a fan's respect and knowledge of the original Sherlock Holmes canon. The twist ending within the finale completely caught me by surprise, because it was the last thing I was expecting during the story's climax. I will not reveal those details here and spoil the surprise, but I sincerely hope Horowitz eventually writes a sequel, picking up where this novel ended.

This adventure is written and reads like the worthy addition to the Holmes legacy it is. The novel has even been endorsed by the Conan Doyle estate, along with Horowitz's previous Holmes story The House of Silk. Although it isn't necessary to read one before the other, I do urge Holmes fans to seek it out as well.
Posted by Lee Houston, Junior at 1:13 PM