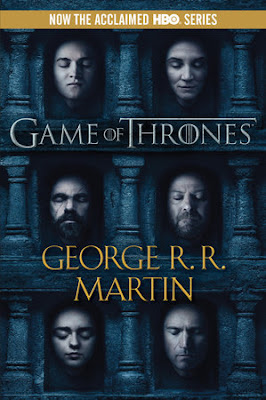 Even if you're like me and don't have access to the premium cable channels, most everyone is at least aware of Game of Thrones, the HBO series based upon the books by George R. R. Martin.

However, Game is actually just the first title in the overall series A Song of Ice and Fire. Five have been released, a sixth is long overdue, and the entire story is supposed to go at least seven novels in length.

Originally released in 1996, the three principal story lines feature Lord Eddard Stark being appointed the King's new Hand of Justice after the previous one was murdered; Eddard's illegitimate son Jon Snow being forced to join The Night Watch that guards The Wall to protect the land from a mysterious threat on the other side, since there is no future for him in his father's holdings at Winterfell; and a young girl named Daenerys Targaryen being forced to marry against her will in hopes that her abusive older brother can eventually usurp and claim the crown that he believes is rightfully his.

The above paragraph does not do the novel justice, for there is much political intrigue, drama, and adventure across the land of Westeros on a planet with an unique orbital path that results in years of summer and very extended winters. By the time you have read the final sentence of Game, only two of the ongoing plots have been resolved to any degree, but Martin is such a good writer that you're anxious to start the next novel to discover what happens.

Readers discovering the series today have the advantage of enjoying the first five novels without the long wait between releases, but be warned that there are many twists and turns in the story along the way, and not every character at the beginning will still be alive by the end of the book. As a reader, it's hard not to develop favorites only to see them suffer their literary demise, but such is the way of life and war even in a fantasy series.

I sincerely hope you enjoy the novel as much as I did.