Now usually, I don't like getting my paws dirty in this mess, but there is no denying that the 2016 Presidential campaign here in America is seriously heating up.

It's more than likely going to come down to the political conventions this summer to determine who the Democratic and Republican Presidential candidates will be.

With that in mind, it would be a major shirking of my responsibilities to my readers and The Free Choice E-zine if I didn't interview the candidates concerning a major issue facing both this country and the world.


WHY DID THE CHICKEN CROSS THE ROAD?

NOTE: All celebrity responses below are humorously impersonated with no actual political endorsements implied or given. 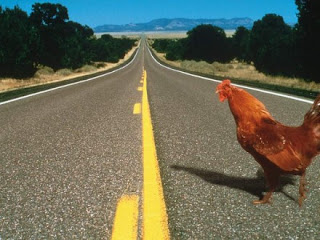 "HILLARY CLINTON": What difference at this point does it make why the chicken crossed the road? The chicken exercised its constitutional right to cross a road, regardless of gender, and that's all that matters.

"BILL CLINTON": Define chicken. Define road. Regardless of your answers, I did not cross anything with one. I can't believe I'm still being asked this long after I've left office.


"CONGRESSIONAL REPUBLICANS": Please come back and ask your chicken question again in late January 2017, after we've finished snubbing and ignoring the lame duck currently in office. 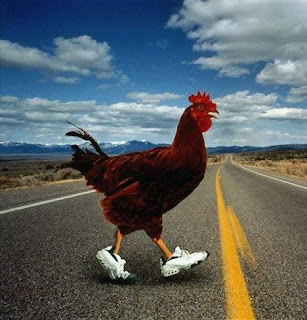 "TED CRUZ": As long as it was a legal American chicken who was not playing
with anything that could be inserted into a bodily orifice or breaking any other laws...

"BARACK OBAMA": Let me be perfectly clear here on this point. If the chickens like their eggs, they can keep their eggs.

"BERNIE SANDERS": All the eggs this chicken laid on the other side of the road, need to be shared equally with all other chickens, even if they didn't lay those eggs. The wealthier chickens need to pay their fair share, regardless of what side of the road they are on.

"DONALD TRUMP": We will build a big wall to keep the chickens from crossing the road, and we will make the chickens pay for it out of their egg money.

Well folks, there you have it. Have a great week and please be back next weekend for more Sunday Funnies.—AtP.

NOTE: All celebrity responses above were humorously impersonated with no actual political endorsements implied or given.
Posted by Lee Houston, Junior at 1:17 PM

Email ThisBlogThis!Share to TwitterShare to FacebookShare to Pinterest
Labels: 2016, April 24, Autumn the Puppy, Political Satire, Sunday Funnies, The Chicken Gets Political, Why did the chicken cross the road