FUN FACT
Ancient Egyptians removed the brain through the nasal cavity when creating a mummy.

AKA, Also Known As
By what more common name do we know cornicione as?

BEFORE AND AFTER
Two separate things have at least one word in common, so can be combined to form something new.
Based upon the clue below, do you know what the new item is?

The result of a team up between Dick Wolf and Steven Bochco?

We’ll reveal all next weekend, but for now, let’s open up THE ANSWERS BOX and discover the results from the March 18, 2017 Puzzle Corner. 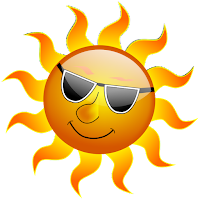 COMMON BONDS
The items within each subset have something in common.
Do you know what it is?
01. {Katrina and the Waves, George Harrison} Both have sung about the sun.
Walking on Sunshine for Katrina and the Waves, while the Beatles heralded Here Comes The Sun.
02. {Bill Withers, Lena Horne)
Both have mourned the lack of sun. Withers singing Ain’t No Sunshine (since she’s gone) and Horne with Stormy Weather.

NEXT?
It’s been quite a while since we’ve played this one.
A sequence is listed below. All you have to do is know what the next item(s) in the line up would be.
Ready?

A, A, A, A, C, C, C, D, ?
F for Florida, because the sequence represents the first letter of each member of the United States alphabetically.
Alabama, Alaska, Arizona, Arkansas, California, Colorado, Connecticut, Delaware.
Posted by Lee Houston, Junior at 6:08 PM

Email ThisBlogThis!Share to TwitterShare to FacebookShare to Pinterest
Labels: 2017, AKA also known as, Answers to Last Week's games, Before and After, Fun Fact, March 25, The Puzzle Corner