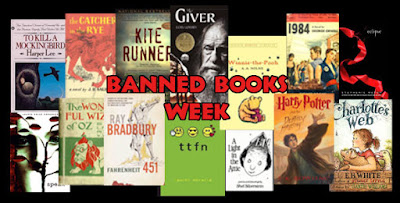 September 24-30 is Banned Books Week here in the United States of America, although the problem is far more widespread than just in our country, and requires a lot more attention than just one week.

Books have been banned throughout the world on religious, political, moral, and other reasons as simple as the person who read the book didn't like it.

Believe it or not, every title in the image above was actually banned by some group, county, or state within the United States at one point or another.

Everyone is entitled to their opinions.

BUT NO ONE HAS THE RIGHT TO FORCE THEIR OPINIONS UPON OTHERS!

If you start reading a book and find something objectionable within it, then you simply don't finish reading it.
If you're the parent of an underage minor, then you do have some right in regards to keeping whatever the book in question is away from your children.


BUT THOSE ARE YOUR ONLY RIGHTS!

These are YOUR rights people!
Don't let anyone take them away from you!

The above was an editorial.
Posted by Lee Houston, Junior at 6:32 PM