JEZEBEL JOHNSTON #5: DANSEUSE IS OUT! 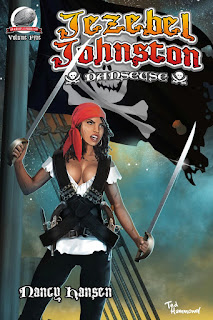 Okay, this may sound like self promotion to some, but the author is a friend and this really IS a great book!

The official press release accompanies this post, but I'm excited to announce that the fifth book in my friendly neighborhood beta-proofreader's lady pirate series is out as Airship 27 proudly releases Jezebel Johnston 5: Danseuse by Nancy Hansen.With a cover by Ted Hammond, who won an award for the cover to Jezebel Johnston 4: Mourning Star, Jezebel finds herself working for a new crew and Captain with a plan to acquire riches, as Johnston goes undercover as a barmaid to spy upon other sailors to learn when treasure laden ships set sail.Yet when an old enemy returns with designs of revenge, Jez soon finds herself wondering who, if anybody, she can trust other than herself.Accompanied by interior illustrations by award winning artist Rob Davis, the book is currently available in print and Kindle version, while Nancy is already working on Johnston # SIX!

AIRSHIP 27 PRODUCTIONS PRESENTS
JEZEBEL JOHNSTON – Vol 5 – DANSEUSE
Airship 27 Productions is proud to announce the release the fifth book in the Jezebel Johnston – Pirate Queen saga by Nancy Hansen.Having sailed to the East African coast with French captains Ancel Thibodeaux, Le Tigre of the Mourning Star and One Eyed Jacques Chagall of the Danseuse, Jezebel Johnston sets about her new career as a spy. Dropped off at trading port in Bombay, it is her task to learn which merchant ships are soon to sail for open waters. She will then pass this invaluable information to the pirate captains.But there are unexpected surprises in store with the reappearance of buccaneer Denis Blanchett. Though a capable seaman, Blanchett has a cruel streak is obsessed with making Jezebel his private property. Meanwhile Chagall doesn’t trust Jez and she begins to worry that his own greed will scuttle their intricate schemes before they can bear fruit.Writer Nancy Hansen’s pirate saga of Jezebel Johnston is unlike anything on the market today and offers up thrills and spills on every page. This is the pirate life with all its dangers and romance as authentically depicting by a master storyteller.Airship 27 Productions award winning Art Director Rob Davis both designed the book and provided the nine black and white interior illustrations, while this year’s Pulp Factory Award winning artist for Best Pulp Cover, Ted Hammond returns for his second gorgeous cover featuring the beautiful and deadly Jezebel Johnston.So sign aboard now and get ready set sail once more for Jezebel Johnston, the queen of high adventure.AIRSHIP 27 PRODUCTIONS – PULP FICTION FOR A NEW GENERTION!Available now in paperback from Amazon and soon on Kindle!(https://www.amazon.com/dp/1946183628?ref_=pe_3052080_397514860)
Posted by Lee Houston, Junior at 3:53 PM