Hello All You Lucky People!
Today you have both Autumn the Puppy AND Waxy Dragon here as we celebrate a double header for the February 2, 2020 Sunday Funnies!

That's right Autumn, because today is BOTH Groundhog's Day and the annual competition known as "The Big Game" for those of us who will not pay the corporate licensing fees to have the rights to call the 54th edition by its proper name.

Personally, I've never seen the attraction to football🏈 myself Waxy. After all, they're hard to grip in your teeth and taste awful.
But, with the dependability of a certain Bill Murray movie, we are proud to present our annual salute to that furry rodent.

“Is this the law firm of Dewey, Cheatum, and Howe?” asked the lady as she walked in my front door.
“Yes it is,” I replied. “I’m Howie Cheatum. And you are--?”
“Susan Woo,” she replied, “but you can call me Sue.”
“Okay Sue. And what can I do for you today?”
“I want to engage your services to represent myself as I initiate a law suit.”
“Well, you’ve come to the right place. Who do you want to sue?”
“Punxsutawney Phil.”
“You want to sue who?” I asked in disbelief.
“Not myself silly. Punxsutawney Phil.”
“The groundhog?” I asked, trying to confirm what I heard the first time.
“Yes, that filthy animal,” replied Sue.
“Why?”
“Because this year he/it claimed we would have six weeks of relatively mild weather and an early spring. None of that came true. I couldn’t break out my spring wardrobe when I wanted to. I hurt my back shoveling the driveway myself because I dismissed the snow plow service early thinking I wouldn’t need them any more this season. Should I go on?”
“No, I get the idea. And on what grounds would you like to initiate this lawsuit?” 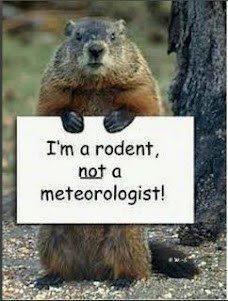 “Don’t you think at a courthouse would be best?” she asked.
“What I meant was, for what reasons did you want to sue?”
“I figured breach of promise at the very least, and whatever else is applicable,” she replied. “The late winter has just totally ruined spring, and who knows just how that is going to affect summer. The trees are barely beginning to bud as it is. Besides, I wouldn’t be surprised if fall arrives on time anyway and cuts whatever is left of spring and summer short this year.”
“I see,” I said, pausing momentarily to wonder why I always got stuck with the live ones. “Let me look up some reference material on the subject,” I said, before turning to use my computer terminal. After a couple of minutes on Wikipedia, I said, “You do realize that this is all just traditional superstition dating back to at least the 1800s in America and at least the fifth century in Europe.”
“So, that means that Punxsutawney Phil should have been a lot more accurate in his prediction than he actually was, right?”
“Well, that’s one way of looking at it,” I agreed while reading the data some more. “While he only has a 39% accuracy rating, it says here that Punxsutawney Phil isn’t the only one who is used to predict the weather.”
“Oh?”
“There’s Jimmy the Groundhog in Sun Prairie, Wisconsin; Holtsville Hall and Dunkirk Dave, wherever they reside, all said that there would be six more weeks of winter. Phil and a bunch of others on this list all predicted an early spring,” I said, showing her what it said on my computer monitor.
“Good. Let’s start a class action suit and go after all of them!”
“It just doesn’t quite work that way. The animals themselves never specifically said what the weather would be. Humans just interpreted the situational conditions as best they could.”
“Well let’s sue them,” said Sue.
“That doesn’t work either. None of them were trained professionals paid to do that job. It would be like me trying to predict the weather just by looking out the window.”
“Then are you suggesting that I should sue the weathermen?”
“Actually, you don’t have a case against anybody involved with Groundhog’s Day predictions. That’s all they were, just predictions. None were legally binding.”
“Then can I sue you?”
“For what?” I asked in disbelief.
“For not taking my case.”
While it would not actually get far in the court system, in this day and age, I’d be surprised if she didn’t find somebody willing to take the case.

Well Autumn, for what it's worth, the Groundhog did NOT see his shadow today, so hopefully we will have six weeks of good weather and an early Spring!
But while my favorite sports are baseball⚾ and eating Belgosian Dark Chocolate, especially if I can eat Belgosian Dark Chocolate AT a baseball game, we dive into the Sunday Funnies Archives and present that great classic: Andy Griffith's What It Was, Was Football! Unfortunately we couldn't find the version we posted for years that was accompanied with the illustrations from the Mad magazine adaptation by George Woodbridge, but this one is courtesy of YouTube too and remember, we didn't create the video or the material within, we're only sharing it with our fans.


And on that note♫, have a great week everybody and please be back here again next time for more Sunday Funnies!—AtP and wd.
Posted by Lee Houston, Junior at 4:36 PM

Email ThisBlogThis!Share to TwitterShare to FacebookShare to Pinterest
Labels: 2020, Autumn the Puppy, February 2, Groundhog versus Football, Sunday Funnies, Waxy Dragon, What It Was Was Football by Andy Griffith