Hello Everybody!
Today you have both Autumn the Puppy AND Waxy Dragon here because it's International Women's Day! 😁

And we'll get back to that in just a moment Autumn, but first we also have to deliver this public service announcement.

For those unaware of, yet affected by the fact that today is also the beginning of Daylight Savings Time in your area: WAKE UP!
If you had any appointments for anything today, you're already at least an hour late!

Now then...
The reason you have both of the Sunday Funnies' wonderful hostesses with you today is because it's INTERNATIONAL WOMEN'S DAY, with March being Women's History Month! 😁

RIGHT ON!
Women have been around since the dawn of time, yet for quite awhile we've been getting the short end of the stick. Granted, not a bad thing for canines, but still... 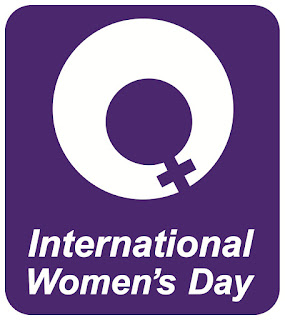 Think of all the great things women have done, and I'm not talking about just taking care of the house and raising families either.
Women have created some of the major inventions of our time!
Yet they didn't always receive credit for their achievements! 😧

The same's true in other areas Waxy. Women have made some great accomplishments, but they've had to work harder, and hardly ever got the support their male counterparts did. Even AFTER they made it to the "proverbial" top, provided they didn't hit the "glass ceiling".

There's also the issue of equal pay for equal work.

True, and what about having the right to vote, let alone even run for any office?
♫We were suffering, until sufferage!♫—Schoolhouse Rock.

But do you want to know what the worst part of all of this is?
IT'S STILL HAPPENING TODAY!

And that's NO JOKE folks!

Okay, not one of our more humorous installments, but then again, what is there to laugh at about inequality?

On that note♫, have a great week everybody and please be back here again next weekend for more Sunday Funnies!—AtP and wd.

♫Sufferin' 'til Sufferage (The 19th Amendment)♫ and Schoolhouse Rock copyrighted by whoever.
Video courtesy of YouTube, which we only accessed via the Internet.
ALL LINKS ACTIVE AT THE TIME OF POSTING.
Posted by Lee Houston, Junior at 4:04 PM