Hello Everybody! Today you have both Autumn the Puppy AND Piper D. Katt here as we celebrate FATHER'S DAY!
That's right Autumn, though one Sunday a year for each parent (Mother's Day and Father's Day), let alone Grandparents' Day later on this year, doesn't seem like enough considering everything one's folks do for their kids.
I know what you mean Piper. My parents certainly had their paws full trying to raise me and the rest of my litter mates before we were all adopted into nice people homes.
Mine too. And being a cat, sometimes even the Humans I live with are busy keeping up with me as well.😉 But enough about that. It's Sunday and you know what the theme for today's jokes are, so let's get right to it!
Let's start by looking at some of the things 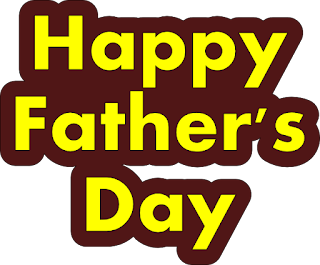 EVERY FATHER KNOWS...
How much liquid is within their waterbed (if they still own one) and how much of the house it would flood if released.
That a 3-year old child's voice is louder than 200 adults in a crowded restaurant.
When you hear the toilet flush and the words 'Uh oh' , it's already too late.
The pain factor of specific toys versus bare feet.
If you smell something funny, find the source IMMEDIATELY!
The response time of every emergency service, food delivery agency, and babysitter in their area.
And now, some more jokes...
Experienced father gives parenting lessons to first time dad in new book: Fatherly Advice by Buck L. Upson.
How is a baby bird like its dad?
It’s a chirp off the old block.
Darth Vader: “I know what you are getting for Christmas.”
Luke: “How is that even possible?”
Darth Vader: “I have felt your presents.”
Luke: “That is such a lame Dad Joke.”
Darth Vader: “It is funny you should mention that.....”
Is there such a thing as a "lame dad" joke Autumn?
Well I know a lot of Humans, especially fathers, who love telling jokes. Not all of them are good at it, but I don't think there truly is such a thing as a lame dad joke. After all, anyone can be a father. That's just a question of biology. But it takes someone special to be a dad.
And on that note♫, have a good week everybody.
Take care.
STAY SAFE! 😷
And one of us will be back next weekend with more Sunday Funnies.—AtP and PDK.
Posted by Lee Houston, Junior at 1:45 AM