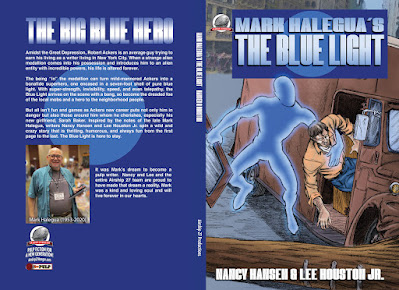 A very special book in memory of one of pulpdom’s most enthusiastic fans and historians, the late Mark Halegua of New York City who passed away in 2021.😞
In the midst of the Great Depression, Robert Ackers is an average guy trying to earn his living as a writer living in New York City. When a strange alien medallion comes into his possession and introduces him to an alien entity with incredible powers, his life is altered forever.
The being “in” the medallion has the ability to turn mild mannered Ackers into a bonafide super hero, one encased in a seven foot shell of pure blue light. With super strength, invisibility, speed and even telepathy, the Blue Light arrives on the scene with a bang and becomes the dreaded foe of the local mobs and a hero to the people.
But all isn’t fun and games as Ackers new career puts not only him in danger, but also those around him who he cherishes, especially his new girlfriend Sarah Baker.
Inspired by the notes and existing rough draft of the late Mark Halegua, writers Nancy Hansen and Lee Houston Jr. spin a wild and crazy story that is thrilling, humorous and always fun from the first page to the last.  Art Director Rob Davis provides the cover and artist Sam Salas the interior illustrations.
The Blue Light is here to stay.
“Mark was one of the first people I met when entering the world of pulp fandom,” related Airship 27 Managing Editor Ron Fortier. “He was also one of the biggest New York Yankees fans in the world and when he learned I was a Red Sox fan well, there was no stopping his amusing jabs whenever we would hook up at pulp cons.” Over time Halegua embraced the birth of the New Pulp movement and became one of its strongest supporters, never failing to promote it whenever he could.
“It was Mark’s dream to become a pulp writer,” Fortier concludes. “Nancy and Lee and the entire Airship 27 team are proud to have made that dream a reality. Mark was a kind and loving soul and will live forever in our hearts.” 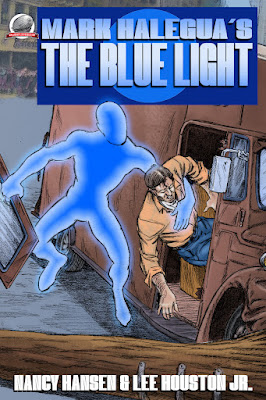 Nancy Hansen remembers, "Though sadly we never met in person, I became friends with Mark online through The Pulp Factory, and he would always joke around about my alleged dark chocolate 'habit' and how I protected my 'stash' better than the US Government guarded Fort Knox with traps worthy of Jack Benny's legendary vault. He started private messaging me on Twitter first about the book he was writing, then in the Fall of 2019 about his health issues. As  time went on he needed help with the book, but it reached the point where I was busy with the western I was working on at the time, which had a short deadline to begin with that they had already extended once on my behalf. So I asked Mark would it be okay if fellow writer Lee Houston Junior went over it with him."
"Which is where I come in. While also only being an online friend I did what I could, even going over the existing manuscript of the time once more," Lee remembers. "Unfortunately I got busy too, then Mark suddenly went radio silent. Ron eventually learned that Mark had passed away alone in his apartment.😢
"So in late March 2020 Team Blue, a term coined for everyone involved, was formed," Lee added.
"Between Nancy and I with Ron's support, we went over the manuscript while compiling Mark's notes and comments from past Twitter and email posts.
"Mark lit the way and after pooling everything he ever wrote about the project, left us with about 2/3 of a completed rough/first draft—around what is now Chapter 18 of the novel—we polished and finished the manuscript."
"Mark was a good friend to all, so this was something we could do to honor his memory and give him the chance to have his name on a cover and his work read by many. Finishing it took up a chunk of last year, but it was a labor of love," adds Nancy.
Mark Halegua's The Blue Light is now available in print paperback and Kindle E-Book from Amazon.
Posted by Lee Houston, Junior at 4:25 PM