Hello Everybody! Piper D. Katt here!
Did you know that Cats start their day by reading the MEWSpaper? It's true!
And I don't mean your old discards that some line the bottom of our litter boxes with.
Believe it or not, we're not just furry friends who look pretty in your lap and allegedly are only concerned about where our next meal is coming from.
Granted, that last part is always a cat concern but anyway...
My point, and I did have one, is that us cats have brains as well as good looks.
I subscribe to the DAILY MEWS, and among the stories of both feline and other animal interest...
The zoo panda🐼 was totally bamboozled when it discovered dinner missing.
Did you know the favorite artist of most farm animals is Pigcasso?
I hear his paintings are just swine.
A turkey🦃 got into a fight and had the stuffing knocked out of it.
I have no idea what the fight was about but it makes me wonder.
Would a snail🐌 fight be a slug fest? 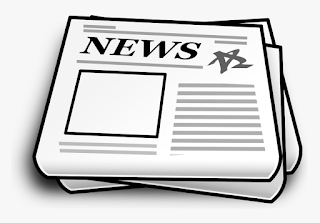 It has been disproven that dogs willing eat homework!
You have to be low enough to trick them into eating it.
An auto store is wanting to hire snakes.🐍🐍
Seems they're short on windshield vipers. 😼
A construction site is needing a new crane, but I don't know any birds who would even consider taking that job.
Animal scientists have confirmed that any member of any species can jump higher than any building because buildings can't jump!
Detective Ali🐊 has just solved another baffling mystery, making him one terrific investi-gator.
The Leopard🐆 Society is refusing to participate in "Hide and Seek" any more because they're always spotted.
So on that note♫ have a great week everybody!
Take care.
STAY SAFE! 😷
And please be back here again next weekend for more Sunday Funnies!—PDK.
Posted by Lee Houston, Junior at 11:13 PM