THE FOLLOWING IS AN EDITORIAL.
ADDENDUM BELOW.
Since my last post on the subject, we have received a few e-mails and comments from Free Choice E-zine readers wondering what the latest is in regards to the safety hazard situation at Walmart #02022.
TRUTHFULLY?
I honestly don't know.
The way my life and agenda has gone since July11, 2022 I've only been in the store once and even then I only had time to grab what I had to and leave because I needed to be somewhere else on time. That situation never had me going past the Deli at the front of the store, so I didn't have the time nor opportunity to look around and see whether or not things might have improved.
Personally, I seriously hope they have for all the reasons I listed in the previous two posts on the subject.
Whenever I do get the opportunity to do more than "a quick shopping dash and go" I will look around and report my findings but until then...
ADDENDUM
Well, I'm man enough to admit when I'm wrong. I DID have to go to my local Walmart tonight after all.
I have GOOD NEWS, BAD NEWS and OMG WTF News.
First, the GOOD NEWS.
Either someone at Walmart #02022 has been reading my posts about their store or came up with the idea independently but, as you can see in the image on the right, they finally acquired CARTS! 😀
That will create a bit of a more organized mess on the selling floor in the public areas when working merchandise because THE BAD NEWS, they are still leaving pallets of goods on the selling floor!😒
This one was to the left of where I took the cart picture. 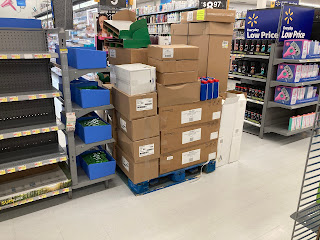 And of course, as you can see in the next two photos, Walmart #02022 is STILL fulling the back aisle with pallets.😒
Of course most of the pallets pictured leave much to be desired from a safety perspective.
Now for the OMG WTF news.
For whatever reason the Deli was already closed for the night by the time I even entered the store, because the overhead lights were already off and there was absolutely no one behind the counter that I'm aware of.
While whoever closed packed all the leftovers for sale as you can see in the lower half of my last picture below, they left all the dirty, empty (save for scraps) heating trays right where they were in the display case!
Although not an actual safety hazard, THIS IS A MAJOR HEALTH HAZARD!
So in the end while there was some progress, Walmart #02022 still has a long way to go.
ESPECIALLY in light of the Deli Development.
Sincerely,
Lee Houston, Junior
Editor-In-Chief: The Free Choice E-zine
August 1, 2022
THE ABOVE WAS AN EDITORIAL.
Posted by Lee Houston, Junior at 10:00 AM