It's the weekend, so let's kick things off right and try to solve some puzzles. 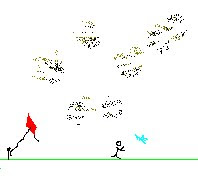 The image at left artistically represents something well known.
Do you know what it is?

COMMON BONDS
The following diverse group of musical talent ALL have one thing in common. Do you know what it is?
{Guns N' Roses, Jerry Reed, James Brown, The Who, Public Enemy, The Isley Brothers, Ice Cube, En Vogue}

We will reveal all next weekend. But for now let's open THE ANSWER BOX to see what last week's correct responses should have been.

TRIVIA TIME
A TARDIS is so named because it can travel through Time And Relative Dimensions In Space.