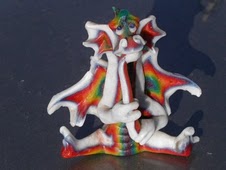 Hello Everybody. Ms. Waxy Dragon here!
Today is October 10, 2010; or 10-10-10 to some people.
Ten is an interesting number.
It is allegedly the best you can do in some sports competitions.
It is supposed to be the highest some people rate, although personally I think I'm an eleven.

But in any event, here are some great jokes that all rate a ten in my book.

01. Two antennas met on a roof, fell in love and got married. The ceremony wasn't much, but the reception was excellent.

02. A jumper cable walks into a restaurant. The waiter said, "I'll serve you, but don't start anything."

03. Two peanuts walk into a bar, and one was a salted.

04. Two cannibals were eating a clown. One turned to the other and asked: "Does this taste funny to you?"

05. A man goes to see his physician and says, "Doc, I can't stop singing The Green, Green Grass of Home."
"That sounds like Tom Jones Syndrome," replied the Doctor.
"I've never heard of that before. Is it common?" asked the man.
"Well, it's not unusual..."

06. An invisible man married an invisible woman. The kids were nothing to look at either.

07. Deja Moo: The feeling that you've heard this bull before.

08. I went to buy some camouflage trousers the other day but couldn't find any.

09. I went to a seafood disco last week and pulled a mussel.

10. Two fish swim into a concrete wall. The one turns to the other and says 'Dam!'

11. A group of chess enthusiasts checked into a hotel and were standing in the lobby discussing their recent tournament victories. After about an hour, the manager came out of the office and asked them to disperse.
"But why?" they asked, as they moved off.
"Because I can't stand chess-nuts boasting in an open foyer."

12. A woman had twins but gave them up for adoption. One went to a family in Egypt and was named 'Ahmal.' The other went to a family in Spain and they name him 'Juan.' Years later, Juan sends a picture of himself to his birth mother. Upon receiving the picture, she tells her husband that she wishes she also had a picture of Ahmal.
Her husband replied, "They're twins! If you've seen Juan, you've seen Ahmal."

13. There was a swami who walked barefoot most of the time, which produced an impressive set of calluses upon his feet. He also ate very little, which made him rather frail and with his odd diet, he suffered from bad breath. Although no one ever said it to his face, this made the swami... A super calloused fragile mystic hexed by halitosis!

14. There was a baby dragon who told 14 jokes, with the hope that at least ten of the puns would make people laugh. No pun in ten did.

Well, that's it for today everybody.
Oh, NOW you applaud!
Anyway, have a great week and we'll be back next weekend with more Sunday Funnies!-wd.
Posted by Lee Houston, Junior at 9:35 PM