BELIEVE IT OR NOT, THE FOLLOWING IS AN EDITORIAL.


Hello Everybody. Autumn the Puppy here.
Now although there is such a thing as political humor, and personally, I find a lot of what humans call politics funny; I feel that the Sunday Funnies is (usually) just not the proper place. We're here to entertain, not take a stand on something.
Unfortunately, one cannot always stay neutral on an issue.
And trust me, I could talk for hours on end about being neutered!
Anyway...
I'm sure everyone's heard about the situation in Wisconsin, USA by now.
If not, Wisconsin Governor Scott Walker offered a contract to the state unions that, amongst other things, would take away their collective bargaining power. If that contract is approved by the state legislature, then whenever it is up for renewal again, Wisconsin could offer the unions whatever they wanted under what would basically be the principle of "take it or leave it". The outcome of this remains to be seen.

I know times are ruff. Everybody and everything is tightening their economic belts as much as possible. My dog food is now coming in smaller cans and doesn't taste as good as it used to!
Cities and states are cutting back expenses wherever they can. But one area that always seems to get trimmed is education.
Less money is put into educational resources. Some schools are closed and the classes combined in other areas, making the larger classes harder on everyone.
One resource that is always cut, and I feel it shouldn't be, is TEACHERS.
Let's face it folks, after the parents, teachers are the next biggest asset to a child's education. After all, the students of today are supposed to become the leaders of tomorrow, and I think a potential leader should have more qualifications than the ability to ask: "Do you want fries with that?"
With that in mind...

A teacher was trying to instruct her pre-school class of 5 year olds how to read. One of them pointed to a picture in a storybook and said, "It's a frickin' elephant!"
The teacher asked, "Why did you call it that?"
The student replied, "Because it says so."
And underneath the picture, it did. 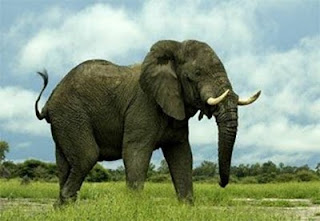 And if you can read this, thank a teacher!
We'll be back next weekend with more Sunday Funnies!-AtP,
Posted by Lee Houston, Junior at 12:45 PM