With the Christmas season upon us, people everywhere are scrambling to not only find the "perfect" gift(s) for their loved one(s), but presents that they can afford as well.
To me, there is nothing more interesting than a good book, so lets look at some of the offerings within the New Pulp genre.
NOTE: These suggestions are just based simply upon my own personal tastes as an avid reader. I have either already read the books below or want to read them, as noted within the individual listings.


Radio Archives has released an impressive anthology featuring Night Beat, an old time radio series about Randy Stone, a reporter who worked the graveyard shift for The Chicago Star.
Featuring the talents of the late Howard Hopkins, Will Murray, Paul Bishop, Bobby Nash, Tommy Hancock, and Mark Squirek to create six interesting short stories that are available in both print, e-book, AND audio format!

My status: want it.

Also by the late Mister Hopkins is The Lone Ranger: Vendetta a novel featuring the masked rider of the plains and his faithful Indian companion that is more true to the legend and what has come before than that movie Disney is filming with Johnny Depp as Tonto is rumored to be.


Sinbad: The New Voyages is an anthology featuring the Arabian Nights sailor with a new crew in stories that harken back to the days of Ray Harryhausen's talented special effects long before computer generated graphics.
Featuring the talents of Nancy Hansen, Ian Watson, and Derrick Ferguson.

My status: read and loved it! When will volume 2 be released?


Derrick Ferguson's Dillon and the Pirates of Xonira, the latest book in this series, has the soldier of fortune going to check on an old friend who might be up to no good now, provided Dillion lives long enough to discover the truth.


I have read and loved the first two books within Ian Watson's Robin Hood trilogy: King of Sherwood and Arrow of Justice.
While the conclusion is not due until 2013, I am seriously looking forward to it and wonder if the rumors that Watson's next project will be exploring the legend of King Arthur and the Knights of the Round Table are true?

My status: read and recommended!


Meanwhile, the second book in Chuck Miller's Black Centipede series was recently released, and Blood of the Centipede has been earning rave reviews! While I will be the first to admit that it is difficult to describe the title character and what happens to between this volume and the previous book: Creeping Dawn: The Rise of the Black Centipede; that adds to the charm of the series!

My status>Creeping Dawn: read and recommended!
Blood of the Centipede: want to read it.

Bobby Nash is a prolific New Pulp writer with a lot of material available. Two of his more recent releases are The Ruby Files, a hard boiled detective in the Great Depression that he co-created with Sean Taylor and
Earthstrike Agenda, a science fiction adventure about our
planet decades after Humanity has reached for the stars. Now the last of mankind must fight an alien race for ownership of the world.

My status: want to read both.


Another hard boiled detective novel is Ten A Week Steale, by Stephen Jared. A veteran of World War 1 comes home to Hollywood and the fledgling movie industry, only to get caught in political intrigue and the love of a rising starlet he might lose, if he isn't killed first.

My status: read and recommended.

For those who remember such series as Tom Corbet: Space Cadet, Flash Gordon, Buck Rodgers and company, comes Three Against the Stars by Joe Bonadonna. A trio of space marines are the only thing that stand between an evil empire wanting to overthrow a peaceful regime to achieve their own agenda.

The Golden Age by Jeff Deischer unites all the Standard/Better/Nedor comic book characters in a new prose adventure set during World War 2.
For fans of either the original Justice Society of America, or the work of Roy Thomas between DC's All Star Squadron and/or Marvel's Invaders, this is the novel for you! 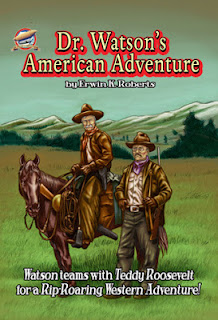 Occurring while Sherlock Holmes was presumed dead after that fateful encounter with Professor Moriarty at the Reichenbach Falls, Doctor Watson's American Adventure by Erwin K. Roberts finds Holmes' friend exploring a new (to him) land and discovering himself as well.


Of course, there are all kinds of books within the New Pulp genre, which is reviving the fast paced, action/adventure format of the past with new tales of both classic characters and brand new creations.
A couple of other releases that you might have heard about this past year are Tales of the Vagabond Bards and The Huntress of Greenwood by Nancy Hansen, and another superhero adventure: Project Alpha by yours truly.

But please remember, the above are only the suggestions of an avid reader.

ALL BOOKS ARE AVAILABLE FROM THEIR RESPECTIVE PUBLISHERS AND AMAZON.COM
Posted by Lee Houston, Junior at 10:52 PM

Thanks for recommending my work, Lee. This is a great list. I've not read all of them yet, but I've read a lot of the. Great stories.

So many books, so little time...

I can heartily recommend NIGHTBEAT: Night Stories as I've listened to the thing three times now and can easily listen to it three more times. I really hope this becomes a yearly thing with more writers presenting us with more Randy Stone adventures.

Ian Watson's Robin Hood books are Must Reads as far as I'm concerned. I feel guilty I haven't written reviews of them yet as they really capture the spirit of fun and adventure I feel is so important to the character.

Chuck Miller's BLACK CENTIPEDE is some wonderfully demented stuff and that's all I'll say about it. Chuck is one of New Pulp's best representatives as far as showing that there are still new ways of doing the time honored Masked Avenger concept in an innovative way.

I've got THE RUBY FILES on my To Read Pile and I feel guilty I haven't gotten to it yet. Going to order THREE AGAINST THE STARS and THE GOLDEN AGE sometime in the next couple of days.

Derrick:
I couldn't agree more with your comments, especially that opening statement. "So many books, so little time..."

Bobby:
I call them as I see them, and your welcome.