Well folks, the end of the year is upon us, meaning this is the last Puzzle Corner of 2012.
But don't worry, we got a lot of new enigmas planned for 2013 and beyond!
In the meantime, let's finish out the year with these puzzles.

COMMON BONDS
The items within each group have something in common. Do you know what it is?
01. {Alistair Sims, Patrick Stewart}
02. {Jim Backus, Alan Young}
03. {Both groups}

THE LETTER SHUFFLE
Last week we sought out words in CHRISTMAS (answers below). Now let's see how many words can be found within NEW YEAR.

We'll reveal all the first weekend of 2013, which is just a week away folks!
Meanwhile, let's peek inside the remains of the unwrapped ANSWERS BOX and discover the results of the December 22 Puzzle Corner. 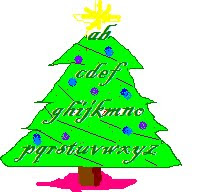 Our tree may be decorated, but there is NO L!

THE LETTER SHUFFLE
Amongst the letters within CHRISTMAS, you can find the following words:

Besides the 132 words listed above, Chris, Christ, and Sam might be eligible, depending upon your position of counting names in a game like this. Other words might be possible.