Hello Everybody, Autumn the Puppy AND Ms. Waxy Dragon here to share with you some of our favorite Carols of the Christmas season.


WAXY: Right you are Autumn, and one of my favorites is Rudolph the Red Nosed Reindeer. The comeback story of Names, a poor little reindeer who makes good despite how Olive always picked on him.
AUTUMN: Waxy, what are you talking about?
WAXY: Well, it's right there in the song. "Olive, the other reindeer, used to laugh and call him Names."
AUTUMN: Well, at least it's not Grandma Got Run Over By A Reindeer.
WAXY: What? When did that happen?
AUTUMN: No Waxy, it's a comedic carol by Elmo and Patsy.
WAXY: The cute, red furred Muppet?
AUTUMN: No Waxy. A different Elmo. Anyway, the video clearly shows Grandma safe and sound at the end. But a lot of people got upset when the song first started playing on the radio.
WAXY: I have no idea why. After all, Santa would never do such a thing. Anyway, another of my personal favorites is The Chipmunk Song.
AUTUMN: A perennial favorite for young and old alike.
WAXY: Do you think Alvin ever got his hula hoop?
AUTUMN: I'm sure he has by now. I know he loves his harmonica. And I also know of Yogi Yorgesson.
WAXY: Who? 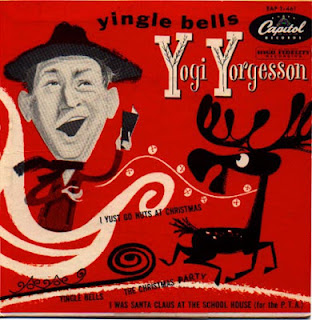 AUTUMN: Yogi was one of the many characters portrayed by a comedian named Harry Stewart, who was big back in the 1940s and 1950s. Two of his best holiday routines were Yingle Bells and I Yust Go Nuts At Christmas.
WAXY: Sounds like fun.
AUTUMN: Yes, they are. I'll play them for you after we're done here.
WAXY: But there's just so many great Christmas songs. Like Rosemary Clooney singing Suzy Snowflake. Captain Kangaroo reading the story of The Littlest Snowman With The Candy Cane Heart.
AUTUMN: A personal favorite of mine.
WAXY: But my point is that I hope everyone comes back next weekend when we talk about more Christmas songs.
AUTUMN: Take care everybody!

For those unfortunate to have never heard any of the songs mentioned in this column, visit YouTube and just enter the song title in the site's search box.
Posted by Lee Houston, Junior at 4:12 PM