Hello Everybody. Waxy Dragon here.
Today, I'm going to be doing something a little different, because this week's Sunday Funnies will be more a trip down Memory Lane than the usual joke posts.
Why?
October 4, 2014 marked the end of an era.
NONE of the major networks here in the United States (ABC, CBS, the CW, FOX, nor NBC) are showing cartoons on Saturday mornings any more!


A long standing tradition since the early 1960s has ended.

Gone are the days of classic comedy, like Bugs Bunny and friends.

Even the adventure cartoons are gone!

So many great shows...
Jonny Quest, Pinky and the Brain, The Pink Panther, The Sylvester and Tweety Mysteries, Scooby-Doo, Tennessee Tuxedo, The Archies, The Smurfs, The Littles, Super Friends, etc...

There are many reasons for the change. The biggest of which are costs and the higher demand for educational programming.
But who said cartoons weren't educational?
There were many shows that delivered a lesson or three within their episodes, like Fat Albert and the Cosby Kids, Muppet Babies, Yogi's Gang, etc... 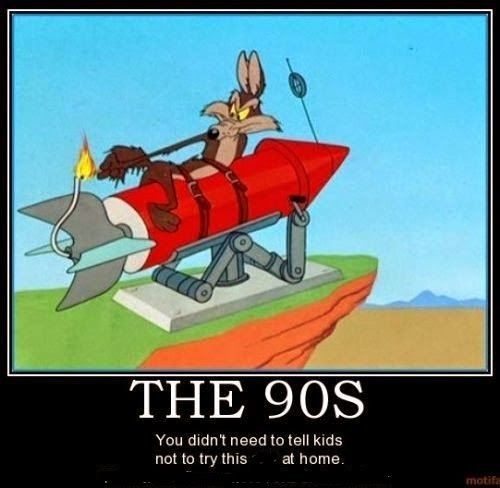 There is a big difference between Human and Dragon years, so I can remember a lot of those great Saturdays of the past, despite the fact I'm only a baby dragon.
Sure, there are cable and Internet options to us kids, no matter what species you are, but according to some of the older dragons I've talked to, it just isn't quite the same any more.--wd.

The Sunday Funnies will return next weekend.
We promise.
Posted by Lee Houston, Junior at 9:44 PM