Today, THE FREE CHOICE E-ZINE chats with Ralph Angelo, Junior; author of The Cagliostro Chronicles. Let's get things rolling by introducing yourself and your latest release in that series. 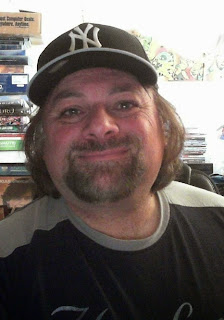 RALPH L. ANGELO, JUNIOR: I write sci-fi/fantasy action/adventure novels, and have about a dozen books out (to date) that I’ve either completely written or have stories in. I started writing professionally in 2005 and began writing novels in 2012. 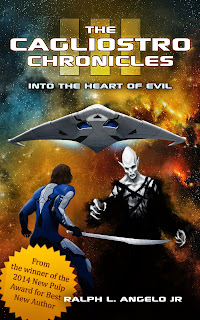 My latest book is the third in my sci-fi/space opera series The Cagliostro Chronicles, entitled Into the Heart of Evil; about the star cruiser Cagliostro delving deep into enemy Agalum space in what essentially is a spy mission behind enemy lines to discover and retrieve an ancient cache of long forgotten weapons plans from a vastly technologically superior, but long dead race. It’s a race against time as two deadly enemies
battle each other while the Cagliostro and its crew must slip past the Agalum as well as the horrific Tahir Ga’Warum. The whole story is a ticking time bomb that could mean the end of the human race. It’s available at http://tinyurl.com/cagchronIII in both Kindle and paperback editions.

TFCE: So how did this whole saga start?
RALPH: The Cagliostro Chronicles began with the first novel dealing with the realized conspiracy and its ramifications, as well as a battle to save the Earth and its inhabitants from the evil of the Agalum race. The second novel The Cagliostro Chronicles II: Conflagration, deals with a battle ravaged Cagliostro that must put down for repairs on an unknown, but earth-like world with strange inhabitants that is also hiding a deadly secret all too close to Earth.
idea of ‘What if we’re being held back technologically by an outside force from leaving our solar system?’

TFCE: Why do you write what you do, let alone what made you choose to become a writer?
RALPH: I didn't choose writing. Writing chose me, and what I write is what I like to read. I enjoy larger than life heroes, the unknown, and futuristic settings. These are the things that make this series and others that I write special to me.

TFCE: What inspires you to write?
RALPH: An idea will pop into my head based on something I’ve seen or read and I build on it from there. This series has actually been in my mind since the late 1980’s. The first scene in the first book as it read out on paper dates from back then.

TFCE: What (if anything) has influenced your style and technique?
RALPH: Certain writers such as Warren Murphy, Robert E. Howard, Lester (Kenneth Robeson) Dent, Alan Dean Foster, Robert Jordan, Edgar Rice Burroughs, whose work I admire have influenced me along the way, as well as certain book and comic book series.

TFCE: What would be your dream project?
RALPH: I used to say writing for Marvel Comics, but now I’m not so sure anymore. At this point I have to say that I’m creating my dream projects right now. If I got paid better for them, that would be another story.

TFCE: Where do you foresee yourself within the next few years?
RALPH: Realistically? Probably right where I am now. Writing whenever I can or whenever inspiration strikes. What I would like to see is all of this become a huge hit with movie deals and contracted writing work from big publishers that make this all into more than simply a love for writing, but an actual, plush living.

TFCE: So, what does lie in Ralph Angelo, Junior's immediate future?
RALPH: Next up for me is a pulp/noir story set in 1937 in a city called Riverburgh. It’s about a man who comes to power and realizes that he must use that power to defend his city from the terrible cancer of mobsters and criminals that control it with an iron fist. It’s called The Grim Spectre and will be available in the summer of 2015. 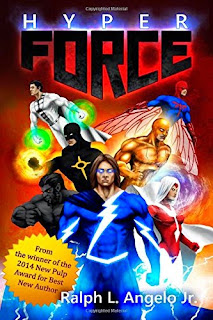 My other works include the first two novels in The Crystalon Saga, which is a far ranging fantasy story set in the modern world. Think Lord of the Rings, Harry Potter, and Indiana Jones all rolled into one.
Also, one of my bigger hits from this past year is my super-hero novel Hyperforce. If you love classic silver and bronze age comics, you’re going to love this book. It’s a fun ride with powerful villains versus fledgling heroes, all while trying to find their way in the modern world. 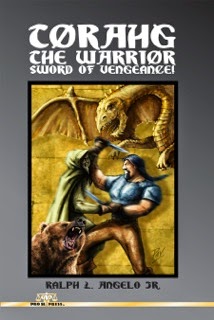 My other novels include Torahg the Warrior: Sword of Vengeance, which is a classic sword and sorcery hero pitted against his evil brother as well as the brothers’ deadly sorcerer, all for control of their deceased father's mighty kingdom. It’s large and powerful. A sweeping saga that crosses twenty years and untold miles set in a prehistoric land filled with magic, monsters, and bloody battles.


All books available from Amazon.
Images accompanying this interview were provided by the author.
Posted by Lee Houston, Junior at 5:54 PM