😎FUN FACT
The Canadian Postal Service, the closest to the North Pole, has established an official zip code for Santa Claus: H0H 0H0! (A combination of H's and zeros.)

AKA, ALSO KNOWN AS
First introduced during A Charlie Brown Christmas, what is the official title of ♫The Peanuts Theme♫?

COMMON BONDS
The people in each subset have something in common. Do you know what it is?
01. {Justin Trudeau, Sissy Spacek, Jimmy Buffett}
02. {Rod Serling, Humphrey Bogart, Clara Barton}

We’ll reveal all next weekend, but for now, let’s open up THE ANSWERS BOX and discover the results from the December 9, 2017 Puzzle Corner. 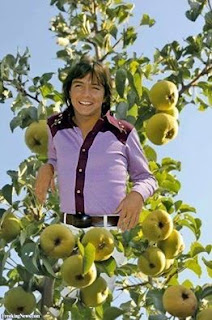 REBUS
Something familiar is represented in the image on the right.
Do you know what it is?

A ♫Partridge In A Pear Tree♫, with the late David Cassidy of The Partridge Family.

THE LETTER SHUFFLE
How many new words can you spell out of the letters in CHRISTMAS?

Besides the 132 words listed above, Chris, Christ, and Sam might be eligible, depending upon your position of counting proper names in a game like this. Other words might also be possible.
Posted by Lee Houston, Junior at 1:50 PM