The following is an editorial.
The third Monday of each January is set aside here in the United States to honor civil rights leader Dr. Martin Luther King, Junior.
A great man assassinated for his beliefs.
One who hoped to see equality for all within his lifetime achieved through nonviolent ways.
Unfortunately that did not happen.
In many ways, as evident by the Black Lives Matter movement and other issues, the struggle still continues today.
Yet King wisely knew that there were also many other issues to deal with in this troubled world.
A fact as true now as it was in the 1960s.
Events of January 6, 2021 in Washington DC prove this point more than valid as one man sought to upset Democracy as we know it so he could stay in power, despite losing the election fair and square.
As Doctor King himself has said... 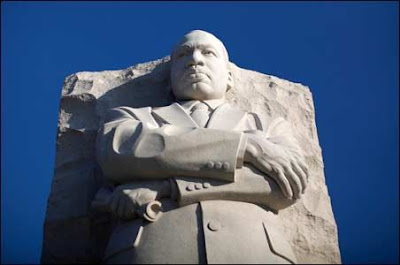 If you succumb to the temptation of using violence in your struggle, unborn generations will be the recipients of a long and desolate night of bitterness and your chief legacy will be an endless reign of meaningless chaos.
Injustice anywhere is a threat to justice everywhere.
We may have all come on different ships, but we're in the same boat now.
We must learn to live together as brothers and sisters or we will all perish together as fools.
Wise words to live by.
Let us hope they are finally heeded.
The above was an editorial.
Posted by Lee Houston, Junior at 5:38 PM