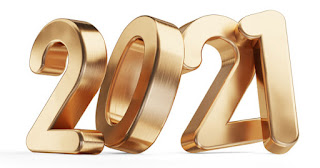 2021 is the first numerically consecutive year since 1920! The next is obviously 2122, a long way off no matter how you examine the situation.
NUMBER PLEASE
Get ready! We ask the question, but the answer is just a number.
What was the first numerically consecutive year?
THE LETTER SHUFFLE
How many new words can you make out of the letters in NEW YEAR?
We’ll reveal all next weekend but for now, let’s open up THE ANSWERS BOX📦 and discover the results from the December 26, 2020 Puzzle Corner’s
FAMOUS FIRSTS🥇: THE CHRISTMAS🎄 CAROL♫ EDITION
Having been inundated with Christmas music by some radio stations since before Veterans Day this year, let’s see if you know who sang which song first?
01. Frosty the Snowman⛄ was first sung by Gene Autry in a 1950 recording.
02. Have A Holly Jolly Christmas was actually first performed by The Quinto Sisters in 1962, although Burl Ives’ rendition is the most famous and popular.
03. Judy Garland was the first to sing Have Yourself A Merry Little Christmas during the 1944 MGM musical Meet Me In Saint Louis.
04. Here Comes Santa Claus🎅 was first sung by its co-writer Gene Autry in 1947, although the classic radio version is actually of a later recording.
05. I’ll Be Home For Christmas was first sung by Bing Crosby in 1943 as a World War 2 morale booster but has since taken on a life of its own.
06. Jingle Bell Rock was first performed by Bobby Helms in 1957.
07. Vaughn Monroe first pleaded Let It Snow, Let It Snow, Let It Snow in 1946.
08. Then 13 year old Brenda Lee first sang Rocking Around The Christmas Tree in 1958.
09. Believe it or not, there are two possible answers for this one!
Rudolph the Red-Nosed Reindeer🦌 first shined in 1948 when Harry Brannon sang it live on various New York City radio programs, but Gene Autry was the first to actually record the song the following year.
10. Eartha Kitt first purred Santa Baby in 1953. Madonna’s version isn’t bad, but wouldn’t you like to see Harley Quinn take a whack at it?😉
11. Santa Claus Is Coming To Town is actually the oldest song on our list. Eddie Cantor was the first to sing it in a 1934 recording, although I personally like the rendition by Bruce Springsteen and the E Street Band.
12. Silver Bells was first performed in the 1951 Paramount Picture The Lemon Drop Kid by its star Bob Hope, who continued to perform it on every TV Christmas special he did until his passing.
13. Sleigh Ride, as an instrumental, was first performed by The Boston Pops Orchestra conducted by Arthur Fiedler in 1949, although the popular radio version is actually one of their later performances.
14. The Andrews Sisters were the first to sing Sleigh Ride's lyrics in a 1950 recording, although Peggy Lee’s I Like To Sleigh Ride version from 1960 is pretty cool.
15. You're right to say Bing Crosby was the first to ever perform White Christmas, but he did so during his radio show on Christmas Day 1941. The movie Holiday Inn was released in 1942, and the remake movie White Christmas in 1954. Between his radio and TV shows, he sang it every year until his passing.
Posted by Lee Houston, Junior at 12:00 AM