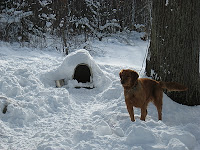 Hello Everybody! Autumn the Puppy back again. I'm standing outside my doghouse, or should I say igloo? Thanks to what was called "Winter Storm Benedict" in my neck of the woods last week, we got over 2 feet of snow within a 24 hour period. I spent a lot of time digging it out as much as you see in the photo on the left and am quite proud of my work.
Then again, I'm a dog. What am I supposed to do, grab a shovel like a human? What do you think these great four paws I have are for? Playing a complete game of bridge by myself? 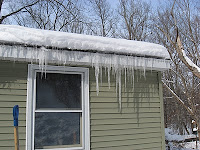 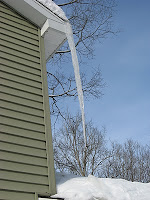 For those expecting Ms. Waxy Dragon this weekend, she called and asked if I could do another Sunday because she is in the middle of legal negotiations with her lawyer. Someone gave her a "lifetime" supply of Belgosian Dark Chocolate as a present this past Christmas. A great present if you ask me. But the problem is, apparently by January 12, she at it all! That's a very short lifetime if you ask me. Granted, Waxy has a heck of a sweet tooth, but  you never want to see an angry dragon when she runs out of chocolate!
Anyway, after all the snow, as the sun tries to come out and melt what it can before the next snow storm arrives, you get icicles.
As you can see in the second picture, I think icicles can be beautiful under the right circumstances, but I'm glad my doghouse wasn't perched under the one in the picture on the left. Snoopy had to face that once in a classic Peanuts sequence by Charles Shultz, and that brave beagle didn't even use a stunt dog! Not this smart puppy! Maybe with the right contract I would consider it, but not without a stunt dog for the dangerous action scenes.
Since this photo was taken, that killer icicle has come crashing to the ground. Thankfully no one was hurt, but it made a tremendous noise upon landing. 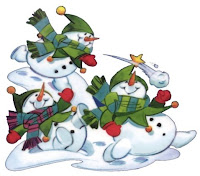 Speaking of classic comic strips, if you happen to have access to the classic presentation of Calvin and Hobbes by Bill Waterson, right now they are rerunning the famous sequence of "Calvin versus the Snow Goon(s)".
Granted, another fun time from the comics, but if I was going to get into a fight with any snow people, I would prefer to do it with the jolly group on the left.
Now since last weekend's Sunday Funnies, some of you fine folks have e-mailed me via our Editor-In-Chief (leehoustonjr@gmail.com), wondering why I love winter so much?
Well, I was born late in the year, hence being named Autumn; so winter is the first season I can completely recall from my younger days. Of course, when you're a golden retriever with a nice, thick fur coat, winter seems perfect to you.
Now I do have my limitations though. I awoke Saturday morning to below freezing temperatures so I wisely stayed in yesterday. Drove my people nuts at times because they thought I hated being couped up, which I do. I definitely prefer the great outdoors, as long as the weather is at least bearable. Dogable?

But if I could be anywhere at the moment? (See below.) 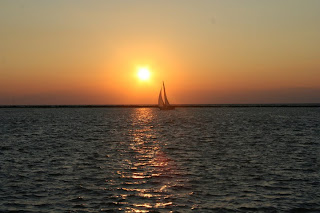 Well, that's it for this weekend folks.
Take care, stay warm, and be back next weekend for more Sunday Funnies!
Atp.
Posted by Lee Houston, Junior at 12:19 PM