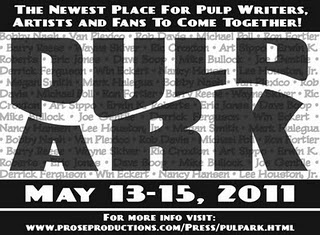 Well, I honestly intended to post this a lot sooner than now, but better late than never.
The first annual Pulp Ark convention was held May 13-15, 2011. Representatives from Airship 27, Moonstone, and other noted pulp creators converged in Batesville, Arkansas; the second oldest city within that state.
Event founder Tommy Hancock, a driving force within the New Pulp movement, also invited those who could attend from his own company, Pro Se Productions.

The three day convention was held at The Cinnamon Stick, who also offered fine food and coffees to their patrons.

While the event did not start until Noon on Friday, May 13, guests began setting up the night before and that morning in preparation for the convention. I attended with my friend, cohort, and fellow writer Nancy A. Hansen, whose first book Fortune's Pawn, will be coming out soon from Pro Se via Amazon!
All of Pro Se's magazines are still available from lulu.com; but all the books the company releases from this point forward will be available from Amazon.com


While such conventions were old hat for the other guests, it was the first professional appearance for everyone from Pro Se Productions that could attend. A lot of us were acquaintances, if not outright friends, with each other through the Internet, this was the first time those who could make it would meet face to face.

Although I will be the first to admit that I was nervous as heck, it was an exciting time that I would not have missed for anything in the universe.
Here, while waiting for the convention to open to the general public, I found myself in a battle of dueling cameras with Ron Fortier.
If he ever posts the results from his camera at that moment, you will see me and Nancy aiming our cameras at him.
Personally, since we outnumbered him 2 to 1, I think we won that duel, but a winner was never officially declared.

I hope this doesn't sound too self serving, but everyone there has worked long and hard to be where they are today not only within the New Pulp movement itself, but within the literature end of the entertainment industry in general.
I have created and written two series for Pro Se, the first of which, Hugh Monn, Private Detective, you can see represented at left with its proud creator.
A collection of all the short stories I wrote for the character will be out some time soon, but unfortunately I do not have an exact release date at this time.
While the first two stories, "Dineena's Dilemma" and "Shortages", have already been published once within the first two issues of Pro Se's Masked Gun Mystery, I have gone back over both stories, as well as the six that have yet to be published because of the company's switch from magazines to books; to make them more of an overall narrative within the forthcoming collection.
The magazines are still available from lulu.com, so when the book comes out via Amazon, you can compare the two if interested in seeing how the writing/editing process works.


But now the shameless plug(s) end as we approach the Noon hour and the doors open for Pulp Fans young and old.
I unfortunately do not have attendance numbers for the three days, but there WILL be a Pulp Ark TWO in 2012!


Besides the local Arkansas papers, Facebook, and everyone's individual blogs and websites, there was outside media coverage of the event.
Here you can see Ric Croxton (on the left) and Doctor Art Sippo of The Book Cave, who recorded all the panels held during the convention and other interviews for their podcasts at http://thebookcave.libsyn.com/

Amongst all the panels and other events held during Pulp Ark was the presentation of an original play entitled "The Case of the Bloody Pulp", a three act production split across the convention weekend.
The cast included local performers Shannon O'Cain, Brian Coltharp, David Jones (no known relation to the Monkee or the gentleman who performs under the name David Bowie), Tanya McClure, and Bo Elrod, along with play writer/director Tommy Hancock and his son Alexander.


As already stated, this was the first professional appearance for all the Pro Se staff who were able to attend the convention.
But the one that is nearest and dearest to my heart is Ken Janssens.
Thanks to Ken, I managed to get a chance to audition for Pro Se, and the rest as they say is history.
It should be noted though that Pulp Ark 1 was not only Ken's first professional appearance, but his first convention as a professional anywhere, because he and his fiance Christina came all the way from CANADA to attend.

Well, I fully intend to do a complete report, but technology is telling me that I am almost out of space in this post.
So stay tuned for part two of the Pulp Ark wrap up!
Posted by Lee Houston, Junior at 6:15 PM