As my complete report on my experiences at the inaugral Pulp Ark Convention in Batesville, Arkansas continues...
Day 2 started with the contential breakfast at the hotel where most of us convention goers wound up staying. The fact that a lot of us were under one roof when not on "duty" wasn't planned, but we certainly took the opportunity to kick back, relax, and just chat with one another whenever possible.
The morning at the convention started off with special guest Wayne Shriver, who could only attend that Saturday due to other commitments, holding a panel explaining "Everything you ever wanted to know about Doc Savage, but were afraid to ask". This was followed by the main reason those of the Pro Se Press staff who were able to attend came: our first official panel as a collective group of writers.
Persoanlly, I think it went off without a hitch, although I will never have what is called a good "radio" voice.
Since I was getting ready for the panel that I actually participated in, I'm afraid I don't have any photos of these events, although other people to take pictures. Anything I was unable to get a picture of you can find on Facebook and other websites.
Then I and the rest of the Pro Se people stayed at the company table, greeting fans and signing autographs until it was time to take a late lunch, so I was unable to attend artist Rob Davis' panel on how to illustrate pulp stories.
But before you get too concerned that this is going to turn out to be an all text report, the afternoon and evening turned out to be a different story. 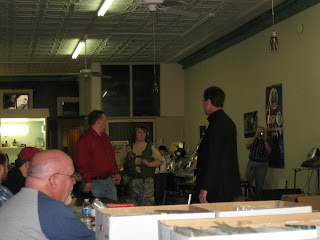 The Pulp Ark Players (and if the company had a more formal name, I am unaware of it) presented Act 2 of "The Case of the Bloody Pulp".
This photo was taken from the Pro Se table while the performance was in progress, so you can see Ric Croxton of The Book Cave watching the show in the foreground, with Rob Davis taking a picture of the act in the far right background.
The players in the middle are Tommy Hancock (red shirt), Shannon O'Cain, and Brian Coltharp (black shirt).


﻿﻿﻿﻿﻿
﻿﻿﻿﻿﻿
Then I attended the class panel on how to write modern/new pulp because even though I have been and will continue to be published, that doesn't mean I know everything.
Pictured are (left to right) Van Allen Plexico, Robert Kennedy. Art Sippo, Barry Reese, and Bobby Nash. The panel was moderated by Ron Fortier, but unfortunately he got cut out of the frame. Sorry Ron.


﻿﻿
﻿﻿
Next Tommy Hancock conducted a discussion about how to blend real life history into pulp stories, but as you can see by the photo on the left, Ric Croxton was preparing to record the panel when I took this image.


﻿﻿﻿﻿﻿﻿
﻿﻿﻿﻿﻿﻿
Then to further my education, I stayed for the Super-heroes in pulp panel, because after I finish prepping the HUGH MONN, PRIVATE DETECTIVE collection for Pro Se Press; I will be doing a super-hero project of my own that I have had since high school that has finally found a publisher and will be out sometime in 2012.
Pictured, from left to right, are Ric Croxton recording Bobby Nash, Van Allen Plexico, and Wayne Reinagel discussing the matter at hand. I sincerely hope I didn't get on anyone's nerves with all my questions, but there are some instances where ignorance is not bliss.

In any event, considering the big evening that lay ahead with the first annual Pulp Ark awards and the art auction, I think I will stop here, and continue coverage in the next installment.
The recodings of the Pulp Ark panels and other pulp related events can be found at The Book Cave at
http://thebookcave.libsyn.com/
Posted by Lee Houston, Junior at 6:55 PM