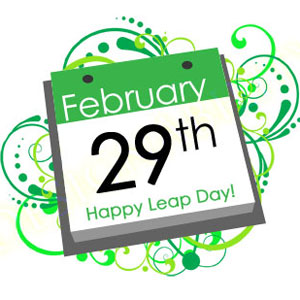 Many wish for extra time in their busy schedules to try and get everything done. But how many actually get it?
Well, once every four years, everyone does.
Today is February 29, 2012; also known as Leap Year.
A true day, or one complete rotation of the Earth upon its axis, is actually about 24 hours and 30 seconds long.
Over time, those seconds accumulate to the point where there are enough to add an extra 24 hour day for the calendar to come out right.
Parents of babies born on February 29 are asked to choose either February 28 or March 1 to record their child's arrival on, since the 29th itself is not a yearly event.
But those lucky enough to be born on February 29th include the late Pope Paul III and Dinah Shore; Mark Foster of the group  Foster the People and the legendary comic book character Superman.


Fans of the television program Quantum Leap have chosen February 29 to celebrate the series as they try to figure out where and when time traveler Sam Beckett (image at right) might be at the moment, let alone when someone will hopefully revive the series and actually answer that question once and for all.


Historic events that actually occurred on this date are mixed, but include the debut of The Family Circus comic strip in 1960, the passing of singer/actor Davy Jones (The Monkees, Oliver!) earlier today, hockey great Gordie Howe scoring his 800th career goal in a 1980 game, and The Free Choice E-zine marking it's 800th article with this post!