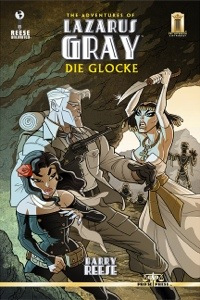 BEST PULP REVIVAL was awarded to The Wild Adventures of Doc Savage by Will Murray from Altus Press.

"The voting this year,” Pulp Ark founder Tommy Hancock noted, “was exciting since it involved so many different creators, works and publishers.  Six different publishers are represented in the final tally, with both the BEST AUTHOR and BEST NEW AUTHOR winners being writers for various publishers in 2012.”
The PULP ARK LIFETIME ACHIEVEMENT AWARD, according to Hancock, is still being determined by the select committee chosen to give the honor to an individual who has done considerable work in furthering Pulp in his/her lifetime.The awards, 8X10 engraved wooden plaques, will be awarded at Pulp Ark 2013 in Springdale Arkansas , the evening of Saturday, April 27, 2013. Hancock stated that all winners as well as nominees are encouraged to attend, but any winners who could not would receive their awards by mail. Pulp Ark thanks all who nominated, all who voted, and congratulations to all the nominees and especially to the winners of the Pulp Ark 2013 Awards!

All books can be found either through their publishers' websites or via Amazon in both paper and e-formats.
Posted by Lee Houston, Junior at 3:16 PM

Thanks, Lee. I was stunned to see my named listed as Best Author. Such a thrill. And we're all excited about the success of The Ruby Files. Rick Ruby has been a great character, lots of fun.

The people spoke what they believed when they voted Bobby. You and all the other winners should be extremely honored.
Lee Houston, Junior
Editor-In-Chief of The Free Choice E-zine

Honored, stunned, flabbergasted. All of these apply. :)