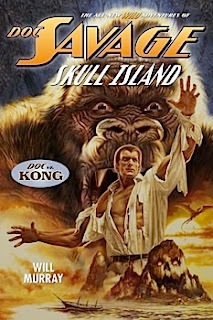 This month marks the 80th anniversary of both the original King Kong movie and the debut of classic pulp character Doc Savage.
A new novel by Will Murray released by Radio Archives has the two characters meeting for the first(?) time.

Amongst the events happening around the world this past week...
*United States President Barack Obama, on a formal visit to Israel, has gone on record with his belief that the Palestine Territories deserve a state of their own.
* Bangladesh President Zillur Rahman has passed away. Speaker of the Parliament Abdul Hamid has been named acting president until an election can be held.
*Najib Mikati has announced his resignation as Prime Minister of Lebanon. There has been no immediate announcement of his impending replacement.
*Civil unrest continues in Syria, Somalia, Pakistan, Afghanistan, and Iraq.

IN NORTH KOREA
*North Korea's saber rattling now includes warning of an "imminent" nuclear attack on Japan, or at least the United States military bases there.
*Meanwhile, the United Nations has announced plans to investigate allegations of human rights violations in North Korea.

FROM OUTER SPACE
*Scientists are speculating and trying to confirm whether or not the Voyager 1 probe launched in 1977 has left our solar system.
*NASA's Curiosity rover has found further evidence of water bearing minerals on Mars.
*The Universe might actually be 13.82 BILLION years old, according to the European Space Agency's Planck Space Observatory's recently released sky map. The charting of the cosmic microwave background reveals an older universe than previously suspected.

IN SPORTS
*The annual World Baseball Classic concluded with the Dominican Republic defeating Puerto Rico.
*College basketball's annual March Madness has begun in both the Men's and Women's divisions. Each side started out with a field of 64 teams that were reduced to 32 at the end of the first round. Before the weekend concludes, that will be reduced to 16 teams on each side for the contest to continue next weekend.

FOR THE SEVENTH STRAIGHT MONTH IN A ROW, THE FREE CHOICE E-ZINE THANKS ITS READERSHIP FOR MAKING OVER 1000 PAGE VIEWS TO THIS OTHERWISE HUMBLE WEBSITE!

For more news at any time, either scroll down to our IN OTHER NEWS feature at the bottom of your screen or visit any other reputable news source.
Posted by Lee Houston, Junior at 3:02 PM