TODAY IS INDEPENDENCE DAY FOR THE CONGO AND INDIA.
NORTH AND SOUTH KOREA CELEBRATE LIBERATION DAY.
AUGUST 16th IS CHILDREN'S DAY IN PARAGUAY.
AUGUST 18th IS THE 95th ANNIVERSARY OF THE 19th AMENDMENT TO THE U.S. CONSTITUTION, GIVING WOMEN THE RIGHT TO VOTE.

*It is suspected that North Korean Vice Premier Choe Yong-Gon has been executed by his own government.
*The Iraqi Parliament has approved Prime Minister Haider al-Abadi's suggestion of eliminating the positions of Deputy Prime Minister and Vice President, amongst other anti-corruption measures.
*Pope Francis has declared September 1, 2015 "Care For Creation" Day.
*The United States Embassy in Havana has officially (re)opened for business.
*The People's Bank of China has devalued the Chinese Yuan in hopes of stimulating the local economy.
*The new economic bailout plan for Greece has been officially approved.
*Desi Bouterse has officially begun his second term as President of Suriname.
*South Korea has established a base on Baengnyeongdo, its northern most island, to deter possible North Korean activity towards them.
*The ongoing heatwave in the Middle East has killed an estimated 60 people in Egypt.
*A McDonald's in France has apologized for telling its employees not to give out food to tramps.
*The debate over a possible new national flag for New Zealand has been narrowed down to 40 possible designs.
*A living night parrot has been found in the Australian Outback for the first time in over 100 years! 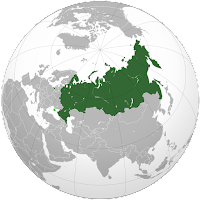 THE RUSSIAN REPORT...
*Russia and Saudi Arabia have failed to reach a cooperative agreement on how to deal with ISIS/ISIL forces.
*Georgia is accusing Russia of keeping citizens from their farmlands with new border signs.
*Remains of a Russian Buk surface to air missile have been found in the Ukraine. Whether it was fired by pro-separatist forces or contributed to the crash of Malaysia Airlines Flight 17 remains unknown at this time.

TERRIBLE TERRORIST ACTIVITIES...
*A truck bomb at a Baghdad market killed over 80 people and left 200+ injured.
*A group of hackers allegedly representing the Islamic State has released personal data on almost 1400 American citizens.
*ISIS/ISIL forces are claiming responsibility for the bombing of Baquba, Iraq.
*The Taliban has claimed responsibility for a bombing at the Kabul International Airport.
*A suspected Boko Haram bomb has killed 50 people in Borno, Nigeria.
*Al-Qaeda has pledged allegiance to the Taliban in an online audio message.

PASSING PARADE...
*Voice actress Susan Sheridan (The Black Cauldron, The Hitchhikers' Guide to the Galaxy) has recorded her last sound track.
*British novelist and comedy writer David Nobbs (The Two Ronnies, Fairly Secret Army) is no longer with us.
*Former football player and sportscaster Frank Gifford has passed away.
*British comedy actor Stephen Lewis (Last of the Summer Wine, Don't Drink the Water) has taken his last bow on life's stage.
*Author Anne Strieber (An Invisible Woman, Little Town Lies) is no longer with us.

*Despite being told they are disobeying the law, a clerk in Kentucky still will not issue marriage licenses to same gender couples. Meanwhile, judges in Ohio have been informed that they must perform same gender marriage ceremonies or be in violation of Federal law.
*The United States Embassy in Havana has officially (re)opened for business.
*On the campaign trail and still ahead of all the other GOP hopefuls for the 2016 Republican Presidential nomination, Donald Trump has told Detroit automakers they "make too much money".
*Due to a lack of campaign funds, it is reported that Republican Presidential nomination hopeful Rich Perry has stopped paying his campaign staff.
ELSEWHERE...

*On the anniversary of Michael Brown's death, new social unrest has arisen in Ferguson, Missouri.
*A toxic spill at the Gold King Mine near Durango, Colorado has contaminated a nearby river and threatens other waterways.
*After decades of suffering Federal budget cuts, Sesame Street has struck a production deal with HBO! The award winning children's program will be on the premium cable channel for the next 5 years, with HBO producing more episodes each season than PBS could afford to, but PBS fans take heart. The series WILL continue on public television too, but HBO has first run rights to the new episodes, delaying them being seen on your local PBS station by roughly one year.

*The Federal Food and Drug Administration has approved medical use of the pain killer Oxycontin for children 11 to 16.

*Unless he decides to move the team after all, Stan Kroenke, owner of the Saint Louis Rams in professional football, has won a law suit that will allow him to build a new stadium for his team with public funds without allowing local citizens a say in the matter.
*Former U.S. President Jimmy Carter has announced he is fighting cancer.
*While he is already scheduled to give a deposition in one case, actor/comedian Bill Cosby now faces sexual abuse accusations from 3 more women.
*A news anchor at a Florida FOX station walked off the set when faced with "another needless story about the Kardashians". There is no word whether or not he will face company disciplinary action.
*Citing stress caused mental health concerns Michael Sam, the first public homosexual professional football player, has decided to end his sports career for now.
*Provided he finds work with another baseball team, reliever Jose Valverde has been suspended for 80 games after testing positive for performance enhancing drugs.

For more news at any time, either scroll down to our IN OTHER NEWS feature at the bottom of your screen or visit any other reputable news source.
Posted by Lee Houston, Junior at 10:21 PM

Email ThisBlogThis!Share to TwitterShare to FacebookShare to Pinterest
Labels: 2015, August 9-15, news, The Week In Review