The dots on a domino are officially called pips.

BEFORE AND AFTER
Two separate items have at least one word in common, and can be combined to form a new phrase. Based upon the clue below, do you know what the new item is?

The Jerk, as portrayed by Ed Grimley?

RHYME TIME
Whatever your response to the clue below is, every word within it must rhyme.
Ready?

We'll reveal all next weekend, but for now, let's open up THE ANSWERS BOX and discover the results of the July 25, 2015 Puzzle Corner.

Jackie Robinson is known as the first athlete to break the color barrier in Major League Baseball, playing for the Brooklyn Dodgers starting in 1947.
But who was the second player to get through that barrier?

REBUS
Something famous is represented by the image below.
Do you know what it is? 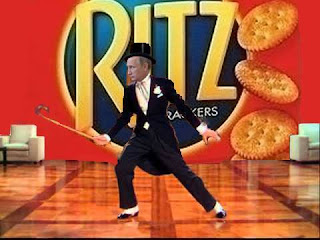 The image on the left is a fanciful illustration of Putting On The Ritz.

The song was originally composed by Irving Berlin in 1929.
Courtesy of YouTube, a flash mob performs the number in Moscow in 2012.
While I do not understand any Russian, the performance looks like ti was staged as part of somebody's wedding to me.

Email ThisBlogThis!Share to TwitterShare to FacebookShare to Pinterest
Labels: 2015, Answers to Last Week's games, August 1, Before and After, Irving Berlin, Putting On The Ritz, Rhyme Time, The Puzzle Corner