LATEST FROM PARIS, FRANCE
*Multiple attacks occurred simultaneously on several Parisian night spots in a coordinated effort.
*A hostage situation arose at the "Eagles of Death Metal" concert held at the Bataclan Theatre, resulting in over 80 deaths!
*The death toll from Friday night currently stands at 130 innocent victims, with some known tourists still unaccounted for.

*There are well over 300 people injured and being treated at various Parisian medical facilities. Some unfortunately are in critical condition at this time, so sadly, the death toll might grow.
*French authorities believe that all the suspected attackers were killed while either fighting the police or trying to flee. However, they are still searching for any "background supporters" who helped plan the massacres but didn't take part in the actual attacks.
*French President Francois Hollande, who has now canceled attending the upcoming G20 Summit; has declared a state of emergency, and such famous landmarks as the Eiffel Tower are now closed indefinitely. Other concerts and events have since been canceled, citing safety concerns.
*ISIS/ISIL forces have since declared responsibility for the Parisian attacks!

*As more refugees continue to flee the Middle East, some European countries have started closing their borders again while they try to figure out how to deal with the situation.
*Myanmar elections have resulted in the first democracy officially voted into power since 1962.
*After a lengthy investigation, the International Association of Athletics Federation has suggested that Russian athletes should be temporarily suspended from completing in world events following doping allegations; with five others and some coaching staff facing possible lifetime bans.
*Russia has since announced that there are no plans to boycott the 2016 Summer Olympics in Rio and will deal with their personnel internally.
*Lufthansa Airlines was forced to suspend over 900 flights this week due to a cabin crew strike, leaving thousands of passengers in need of alternate travel means.
*An investigation by a Canadian news team has uncovered the fact that some grocery store employees are taught how to tamper with "Best Before" selling dates.
*Scientists have predicted that climate change could be responsible for a huge increase in the world's poverty level by 2030, due to an increase failure in farmers being able to produce crops.
*Meanwhile, it has been confirmed that green house gas levels have reached their highest known level as of 2014, but are still rising.
*Thermal anomalies have been discovered in the Pyramids of Giza. An explanation for the phenomenon has not been officially determined yet.
*Preparations and precautions (since it might be booby-trapped) are underway to investigate the suspected sight of a lost "Nazi gold train" in Poland.
*A guitar once owned by John Lennon has sold for over $2.5 million US dollars.

OTHER TERRIBLE TERRORIST ACTIVITIES...
*Two Boko Haram suicide bombers killed three people near Lake Chad.
*Unidentified gunmen opened fire in a Bujumbra, Burundi bar; killing nine people.
*The Syrian Army stopped an attempt by ISIS/ISIL forces to seize control of the Kweires Airbase.
*Two separate suicide bombing attacks have left a total of 43 people dead in Lebanon.
*Someone attacked three separate commercial aircraft with a laser as they were about to land at Dallas, Texas' Love Field.
*There is still no official determination at this time whose bomb destroyed Metrojet Flight 9268.

PASSING PARADE...
*The victims of the cowardly attacks on civilians in Paris, France November 13th.
*Famous session drummer Andy White (too many credits to mention) has passed away.
*Actor Nathaniel Marston (One Life To Live) has taken his last bow on life's stage.
*Songwriter Allan Toussaint ("Working In A Coal Mine", "Southern Nights") is no longer with us.
*Helmut Schmidt, Chancellor of Germany from 1974-1982, has passed away.
*Actor Warren Mitchell (Till Death Do Us Part, Death of a Salesman) has taken his last bow on life's stage.

*An appeal against President Barack Obama's Executive Order on immigration has been granted in New Orleans for illegal immigrants who entered the country as children with their parents, thus giving them at least temporary protection from possible deportation.
*While the legality and constitutionality of The National Security Agency's bulk collection of phone information is being debated in Federal court, the agency has promised to reform the policy soon.
*An upcoming new Showtime documentary, The Spy Masters, claims that then President George W. Bush was first warned in JULY and not August 2001 of a potential attack against the United States that became September 11, 2001.
*While Ben Carson is still the GOP front runner of the moment for the 2016 Republican Presidential nomination, he has questioned the policy of journalistic fact checking, especially when in concerns background details about his life.
*Meanwhile, Donald Trump hosted the November 7, 2015 episode of Saturday Night Live, the first GOP candidate to do so.
*Despite the fact that there have been several Republican debates (to date), a quick fact check of the transcripts reveals that not one single candidate has yet to discuss ending voter suppression, closing the income/class gap, or ensuring paid family leave. Yet they have discussed additional tax cuts for the rich and claim that raising the national minimum wage rate would be "a disaster".
ELSEWHERE...

*After the University of Missouri football team joined protesting students in calling for the dismissal of University President Tim Wolfe over racial tensions on campus; Wolfe has since announced his impending resignation, due to take effect at the winter break in a few weeks.
*A Utah judge ordered a foster baby taken away from a same gender couple, prompting outcries from even the Republican Utah state Governor Gary Herbert on the matter. The judge has since reversed his decision.
*You can add Staples to the growing list of retailers who have announced that they WILL be closed on Thanksgiving to preserve the holiday for their employees! 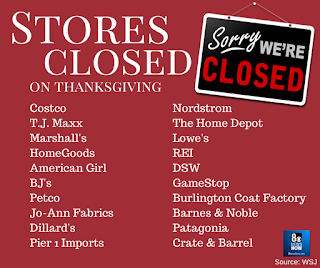 *Besides a cost of living salary raise, Wal-mart workers are now hoping the company will finally extend employees' 10% discounts to food.

*New York has ordered the online sites Draft Kings and Fan Duel to stop operating in that state, because they violate illegal gambling rules.

For more news at any time, either scroll down to our IN OTHER NEWS feature at the bottom of your screen or visit any other reputable news source.
Posted by Lee Houston, Junior at 6:19 PM

Email ThisBlogThis!Share to TwitterShare to FacebookShare to Pinterest
Labels: 2015, news, November 8-14, The Week In Review