SUNDAY FUNNIES: THIS AND THAT (misc. jokes)

Hello Everybody! Waxy Dragon here!
Spring is finally starting to show some signs of arriving where I'm at, which is farther south than Autumn the Puppy the way the crow flies, but who wants to fly with them?
They're always stopping at every corn field wanting to eat what doesn't belong to them and no bird I've ever talked to has never even heard of Belgosian Dark Chocolate.
I find that VERY hard to believe, but anyway...

The days are starting to get warmer.
The grass is starting to turn greener.
The trees are finally starting to leaf and the flowers bloom
And Bubblehead says I have to clean my room.

In any event, been finding a bunch of jokes in my special joke file I've yet to use, so...

I love the term “we’re expecting” when people talk about pregnancy. It sounds like there’s more than one outcome. “We were expecting a baby but it could be a Velocaraptor”. 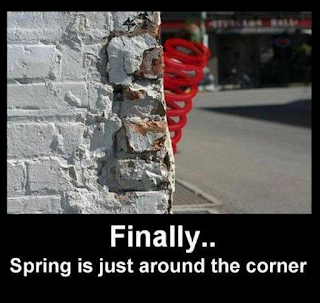 My water bed is much bouncier since I started using spring water.
Do you make spring water by running over coiled metal?
Or is it water gathered during just one season?

Before Spring finally showed up, every time I went outside to check the thermometer it said, "Get back in the house where it's warm!”

I found this interesting quote.
"People who deny the existence of dragons are often eaten by dragons from within." –Ursula K. Le Guin.
Now, I honestly don't know what she meant by that, because us civilized dragons know that people are not crunchy and don't taste good, no matter how much ketchup you use!

Bubblehead was very upset when his bunnies escaped, because his worst fear as he grows older is hare loss.

One genetic scientist said to the other, “I just bought a new pair of jeans.”👖
The other scientist asked, “Dominant or recessive?"

I went to a Mary Poppins themed restaurant last night. Super Cauliflower Cheese but the lobster was atrocious!

And on that note♫, have a great week everybody and please be back here again next weekend for more Sunday Funnies!—wd.
Posted by Lee Houston, Junior at 10:09 PM

Email ThisBlogThis!Share to TwitterShare to FacebookShare to Pinterest
Labels: 2019, March 31, Miscellaneous jokes, Sunday Funnies, This and That, Waxy Dragon