It has been quite a while since I've posted one of these.
Not because I haven't read any books lately. Quite the opposite.
But I have been so busy with my own writing when I'm not overseeing this website as its Editor-In-Chief, that I just haven't gotten around to this task lately, so...

ANGELS AND DEMONS BY DAN BROWN 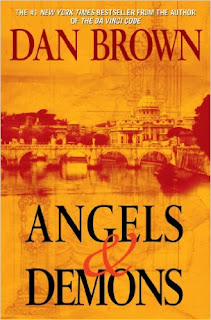 The first book (of five to date, The Da Vinci Code was the first movie) chronicling his adventures finds Icon and Symbology Professor Robert Langdon summoned to the CERN Institute in Switzerland to confirm evidence indicating a potential suspect involved in a gruesome murder committed while stealing a canister containing experimental antimatter, which is now being used as a weapon by the enemy with the objective of destroying the Vatican just as all the world’s cardinals have convened to select a new Pope!

It not only becomes a race against time to find and stop the bomb, but to save the top four candidates in line to become the new Pope as Langdon and a CERN representative track down clues throughout Vatican City trying to locate the undiscovered stronghold of the legendary Illuminati, provided it still exists and the villain behind everything isn’t hiding elsewhere.

As I have stated in past book reviews, there must always be at least some suspension of disbelief when reading any work of fiction, and there are a few far-fetched moments where that must be practiced while reading this novel. However, a willingness to do that will lead the reader on a page turning thriller for the majority of this book.
Posted by Lee Houston, Junior at 1:38 PM