Since hearing that there is apparently no "official" celebration, The Free Choice E-zine has taken it upon itself to make sure that there is at least some recognition of the historic Woodstock Music Festival today upon the advent of its 50th anniversary. 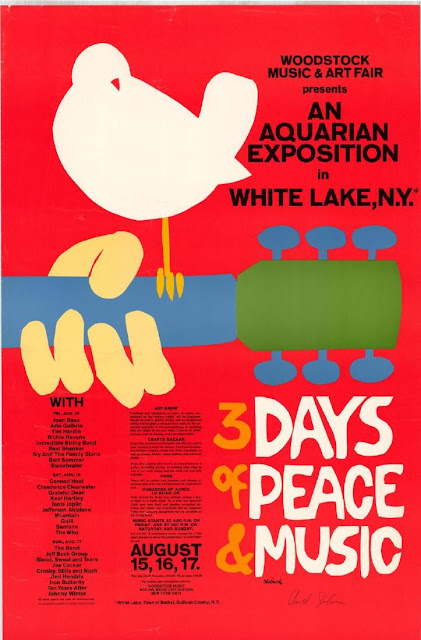 Whether they were a performer, an employee, attendee, or whatever; we've been asking anyone who can to please blog, Facebook, Instagram, Tweet, or whatever today their memories of August 15-18, 1969.

Of course, it would be remiss of us to ask others to do something that we do not ourselves, so...

August 15, 1969 I was 7 years old, still enamored by the recent completion of the historic Apollo 11 moon landing, and unfortunately nowhere near New York state, let alone the concert itself.
It wasn't until years later that I even realized what Woodstock was beyond a new character Charles Schulz introduced in the Peanuts comic strip.
But think about it for a moment.
Basically concert attendees had a 4 day vacation away from all the stress and turmoil (Vietnam, etc) of the world. Where the only things they really had to worry about were mud (being an outdoor event, there was no control over the weather) and the long line to the bathrooms.
People nowadays go out of their way to attempt obtaining such stress free moments. Traveling and paying high prices to find remote areas where there are no cellphone bars, or at least have a relaxing spa massage or a day on a quiet beach where one can veg out for a moment.
Yet for those 4 days in 1969 (events of the last night ran well past midnight, hence the references to August 18) one could have some brief serenity here on Earth.
That is really something, and a peaceful world is an objective we should all strive for now!
I love music. The songs of the 1960s are among my various memories and playlists.
If time travel is ever possible, I would love to go back and attend the Festival for myself. Maybe even record the whole event from start to finish for prosperity.
Hey, a man can dream.