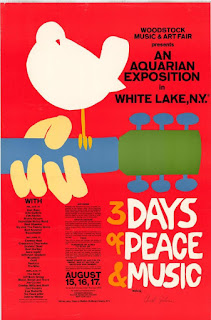 Two major anniversaries are coming up, so let’s honor both.

FAMOUS FIRSTS🥇
Who was the first act to perform at Woodstock 50 years ago?

TRIVIA TIME⌚
Cousins Fredric Danay and Manfred B. Lee combined their talents to create the Ellery Queen mysteries📚, which celebrate their 80th anniversary this year. But what other famous mystery series did they write under a different pseudonym?

We’ll reveal all next weekend, but for now, let’s open up THE ANSWERS BOX and discover the results from the August 3, 2019 Puzzle Corner.

FAMOUS FIRSTS🥇
What originally fictional game was the first to become an actual sport?
Many people believed it to be Quidditch from the Harry Potter books and movies, but it is actually Pooh Sticks from the Winnie the Pooh series.

THE 50/50 CHANCE
Just like a regular TRIVIA TIME question, except there are just two possible answers, hence the even odds of getting it right. Ready?

Which is the older game: checkers or chess?
CHECKERS! Under its original name draughts.
Posted by Lee Houston, Junior at 2:36 PM