TRUMP HAS FAILED AMERICA! (an editorial)

The following is an editorial.
Folks, let's be totally honest with each other here.
"PRESIDENT" DONALD TRUMP HAS FAILED AMERICA!
There is no denying that his (in)actions and erroneous beliefs on behalf of the United States against the COVID-19 pandemic facing the world have contributed to over 7.6 MILLION infected Americans, including Trump himself!
While there still would have been lives lost to this disease, the death toll would not be over 212,000 people in this country as of October 12 if Trump, let alone those under him, took this medical threat seriously when first advised of it back in January 2020.
Do we even need to to discuss other matters under the Trump "Administration", like:
Racial Unrest
Social Inequality
Health Care
His Unneeded Border Wall (which Mexico did NOT pay for!)
Separating Families and Putting Children In Jail Cells
The Next Supreme Court Justice...
Trump was even officially impeached over collusion charges against a foreign country and only a Senate controlled by his fellow Republicans saved him from being ousted from office or worse.
The fact that George W. Bush, the only previous Republican President still living, won't endorse the current regime is telling in and of itself. 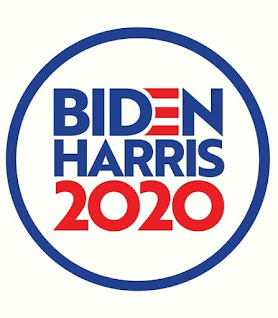 You, me, America, the world cannot afford another day—let alone 4 more years—of this man, his cronies, and their so called "policies" that only favor a select few instead of everyone.
THAT is why The Free Choice E-zine is urging you to not only vote in this upcoming election
But to vote Democratic
And especially for Joe Biden and Kamala Harris as our next President and Vice President, respectively.
Despite all the rhetoric and hype, the only people truly "better" off than they were four years ago are the Republicans in power and their chosen friends/allies.
PLEASE!
Do the right thing and not only protect this country's future, but your own as well!
The fate of America, let alone the world, is in your hands.
November 3-GO VOTE!
And VOTE DEMOCRATICLY!
Thank you.
The above was an editorial.
ALL LINKS WERE ACTIVE AT POSTING OF ARTICLE.
Posted by Lee Houston, Junior at 1:49 PM