If there is one goal everyone wants to accomplish in life, it's to be able to get through whatever adversities may come our way.

With that in mind, and the fact that Health Care Reform has been so much in the news of late, let's take a look at humor within the medical profession.

A man with a broken arm was being examined by his doctor. The doctor told him that within a few more weeks the bones would be healed and then the cast could be removed.
The man then asked the doctor if then he would be able to play the violin, to which the doctor replied that he didn't foresee any reason why he couldn't.
"That's funny," replied the man, "I've never been able to play it before."

Why did the doctor lose his temper?
Because he didn't have any patients.

What did one tonsil say to the other tonsil?
Get dressed. The doctor is taking us out!

Why did the rabbit go to the doctor?
Because he felt jumpy.

What's the difference between the Bird Flu and the Swine Flu?
For one you receive tweatment and the other you get oinkment.

And finally, one group's approach on how to deal with the swine flu. 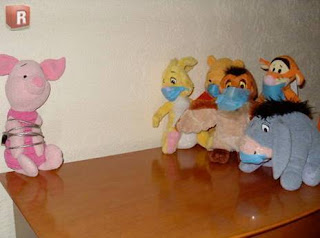 Okay folks, see you next weekend with more Sunday Funnies!--wd.
Posted by Lee Houston, Junior at 11:16 AM