I am not one who usually toots their own horn, but this is just too good to go unnoticed!

For the past few months, I have been writing for a new company called Pro Se Productions. They are part of the growing movement to revive the classic pulp genres of the past to a more modern audience.

And as you can see by the illustration below, there is an interesting cast of characters that will appear within the magazines including:
Sherringford Bell, Roshanna the Huntress, Peculiar Oddfellow, Gary Wooten, The Song of Heroes, The Sky Riders, The Cerberus Clan, Perry Lell, Lazlo Dragon, The Rapier; and my contributions to all this fun: Wylde World and Hugh Monn, Private Detective.

You can order the first issue of each title now within its E-format (PDF) through the publisher's website at www.proseproductions.com
And yes, print copies will be coming soon.

I hope you enjoy everyone's hard work in these and all the future issues to come. 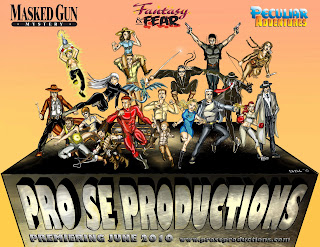