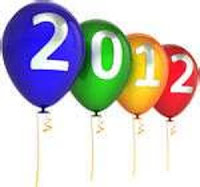 Now that the new year is upon us, let's take a moment to see what lies in the days ahead for 2012.

*Professional football is heading into its playoffs to determine the contestants for the 2012 Super Bowl February 5. Meanwhile other sports fans are happy that professional basketball has resumed at last, and there will also be professional hockey working its way towards the playoffs for the 2012 Stanley Cup and spring training for Major League Baseball's new season begins in late February.

*February 6 is the Diamond Jubilee of Queen Elizabeth the Second.

*Yeosu, South Korea will be hosting the World Expo from May 27 to August 12.

*Sometime in August Curiosity, the Mars Science Laboratory is due to land on the red planet.

*The Summer Olympics will be July 27 to August 12 in London, England; with the 2012 Paralympics immediately afterwards at many of the same venues.

*There are several elections scheduled this year, including United States President Barack Obama running for reelection against a Republican candidate to be announced.

*Movies many are looking forward to are the first attempt at a live action adaptation of Edgar Rice Burroughs' John Carter (of Mars) in March, The Avengers in May, and the big screen adaptation of the best selling book Abraham Lincoln, Vampire Hunter debuts in June. The Amazing Spider-man will be battling Batman: The Dark Knight Rises for an audience in July, and part 1 (of 2) of Peter Jackson's adaptation of The Hobbit hits theaters in December.

*70 years ago in 1942:
It was officially WORLD War 2 with the formal entry of the United States January 1
Barnaby comic strip began April 20
Bambi premiered on August 13
Tweety Bird debuted in "A Tale of Two Kitties" on November 21

*65 years ago in 1947
Jackie Robinson signs a contract with the Brooklyn Dodgers April 1, just six days before the start of the baseball season.

*60 years ago in 1952:
Singin' In The Rain debuted on March 27
The Edsel made its mark in automotive history on September 4

*50 years ago in 1962:
The USS Arizona World War 2 memorial was dedicated that Memorial Day
Movie version of The Music Man debuted on June 19
The Lucy Show debuted on October 1

*40 years ago in 1972:
Kolchak The Night Stalker first appeared on television January 11
Magnavox Odyssey heralded what would become the video game age May 24
Atari releases what will become the first arcade game "Pong" November 29

*PLUS: our illustrious Editor-In-Chief turns 50 March 5th, while The Free Choice E-zine will be celebrating both its 800th AND 900th posts, as well as its 10000th visitor this year since reestablishing itself here on Blogger. Unfortunately the records from our previous web server were lost when that company folded, so we sadly do not have accurate numbers on TFCEz's career record, but we are averaging over 600 page views a month on Blogger!

In any event, 2012 looks to be another banner year in world history and we hope you are with us for all 366 of them, for 2012 is also a leap year, which does thrill enthusiasts of the program Quantum Leap.
Posted by Lee Houston, Junior at 6:36 PM

Email ThisBlogThis!Share to TwitterShare to FacebookShare to Pinterest
Labels: 2012, looking ahead, milestones