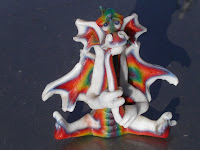 Ms. Waxy Dragon here wishing everybody a Happy New Year!
What's that? Today's January 23?
I'm not late by the Lunar calendar.
Today starts the Chinese New Year, also known as the Spring Festival. Although with all that snow I see outside my window right now, Spring might be a little late.
The festivities are basically between now and the upcoming full moon, steep with traditions such as the welcoming of the deities on the first day, visiting with family on the second, and other events leading to the Lantern Festival on the last day.
I have extra reason to celebrate because 2012 is the Year of the Dragon!


Tradition holds that the lunar calendar cycle is based not only upon the phases of the moon, but the Chinese zodiac as well.
Those born (hatched?) during the Year of the Dragon are said to be extremely lucky. Other personality traits include being intellectual, fiery, passionate, decisive, pioneering, magnanimous, stately, vigorous, strong, self assured, proud, noble, direct, dignified, eccentric, artistic, generous, and loyal. That describes us dragons to a tee!
Famous people born during a dragon year include (alphabetically) Juilette Binoche, Sandra Bullock, Courtney Cox, Colin Farrell, Calista Flockhart, Courtney Love, Julie Ormond, Isabella Rossellini, Dinah Shore, and Reese Witherspoon.
But perhaps the person most associated with this is the late martial arts expert Bruce Lee, who was born in the 1940 dragon cycle and found fame first as an instructor, and then as a stunt coordinator-performer before going on to star as Kato in the 1960s television version of The Green Hornet and such feature films as Fists of Fury and The Way of the Dragon.
wd.