As promised, despite the fact that my own digital camera did not survive the trip down to Batesville, Arkansas; I have acquired some photos from the Pulp Ark 2012 convention to share with Free Choice E-zine readers.
All were taken by convention attending photographer Carlin Stuart and are used with permission.
The captions and comments are from my own perspective.
Al Bohl, the executive producer of the documentary Tarzan: Lord of the Louisiana Jungle, attended Saturday, presenting a look at the very first Tarzan film ever made, the 1918 silent movie Tarzan of the Apes, featuring Elmo Lincoln in the title role.
While only the documentary itself was shown at Pulp Ark 2012, the DVD also contains the original movie too. For more information, you can visit www.TarzanLordLAJungle.com

Here is a lady fan with VERY long hair posing with actor Felix Silla Sunday morning. Amidst  his credits, Silla originated the role of Cousin Itt on the original Addams Family television series with John Astin and Carolyn Jones.


Other than being knowledgeable about his career and the entertainment industry in general, as well as being respectful and polite to him, I still do not know how I deserved such an honor Saturday morning. I only planned to sit in the audience with everyone else, but the next thing I know, I'm sitting next to Pulp Ark 2012's Guest of Honor and helping him field questions from the audience!
Some celebrities are known to put on airs and be aloof, but Felix Silla is one of the nicest people it has ever been my privilege to meet, and I shall always treasure the moment.


Here we have a group shot of actor/writer Stephen Jared on the left, Felix Silla center, and Carlin Stuart himself on the right.
Unsure who took this photograph since the photographer is in it, but Felix's shirt marks it as a Sunday morning image. 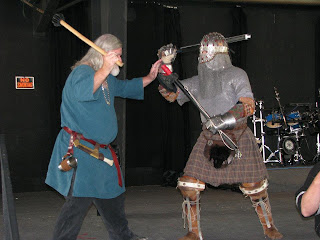 Here is Aubrey Stephens and another member of the Society for Creative Anachronism in action during a Saturday demonstration.
The stage saw many events during Pulp Ark 2012, including a concert by the Order of Tyr, a video game music meets metal rock group Friday night, hence the drum set in the background.


And of course no convention would be complete without costumed characters. Here we see New Pulp's resident spokeswoman The Pulptress (Megan Smith) with Pro Se Press and Pulp Ark's co-founder, publisher Tommy Hancock. 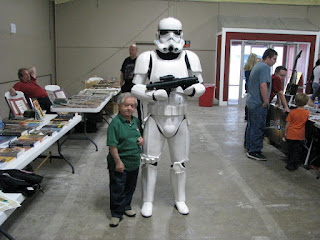 Felix Silla was also an Ewok in Star Wars: Return of the Jedi. He was the one on a makeshift hang glider during the battle on Endor. Here he is with a "friend" Saturday afternoon.

I have absolute no idea who is within the Rorschach costume, but on the right is Big Daddy Cool himself, Johnny Dellarocca, an entertainer specializing in the 1920s-40s, or as he calls it: "Diesel Punk", Steam Punk's successor.
But do all team ups have to start this way?


Unfortunately, I don't have the space to post EVERY image. During the three day event that was Pulp Ark 2012, Carlin Stuart took at least 150 photos that I am aware of. Or at least, that is how many that are on Facebook at the moment that I can swear to.
To see the full album, please visit that social network for his work and those of other attendees.
But hopefully the above has given everyone a hint of all the fun and excitement during the course of the convention, and there WILL BE a Pulp Ark 3 in 2013!
See you there?